Dirty Protest will be an evocative phrase for anyone who can remember the 1970s & 80s in Ireland. If you don't remember, or didn't study late 20thC Irish history in school, you'll have to Google "Long Kesh" "Blanket Protest" "Dirty Protest" and "Hunger Strike"; maybe also "Laurence McKeown" who survived? I was reminded of this by the phrase "instead of slicing through it the knife-edge simply melted upon contact, leaving streaks of fecal matter" in a scientific report from Kent State U, Anthropology Dept Experimental replication shows knives manufactured from frozen human feces do not work. Whaa'? Why would you want to do an experiment that starts with adopting diet rich in fat and protein, and harvesting what's left after a passage through a human bowel?  Because of a widely repeated story by ethno-anthropologist by Wade Davis [of whom I am a quite shameless groupie multibloboprevs] by an Inuit informant whose grandfather had escaped the prospect of government internment by using a frozen-shit knife  to kill and butcher a dog and using the carcass as an improvised sled.

It would be hard for Davis not to take this personally as he is the sole living, broadcasting witness to the grandson's tale and is on record as believing it as fact rather than a tall tale to bamboozle the educated Westerner. It's like a colleague of mine suggesting, at the twice yearly faculty meeting, that final year student research projects involving computational molecular evolution aka bioinformatics should be marked out of 50% because they doing aren't real science . . . and then asking me not to take it as a personal attack despite me being the only person to offer and supervise such projects.

Davis responded to the critical experiment with a peculiarly pedantic essay in Nautilus (the science magazine that "combines the sciences, culture and philosophy into a single story"). As far as I gather, Davis thinks:
Perhaps it would have been better to maintain a magisterial silence about the failure to replicate the Inuit experience. Not least because his response has given the story a lot more sled a là Steisand Effect. Did someone mention replication? That's a key tenet of science because the singular of data is anecdote. Only one shit-knife was made in Ken State it didn't work so good. If you started the process with 10 different bowels, including some inside native Inuit who always eat blubber and meat, maybe the case would be altered. But let's not forget to credit the Inuit for being handy and thrifty with the limited resources available to them: they've lived in the Arctic for thousands of years where/when most of us wouldn't last 1,000 minutes.

Source: Metafilter were the comments point to a Japanese experimentalist who makes knives out of ice, tin foil, rice and other unlikely products. 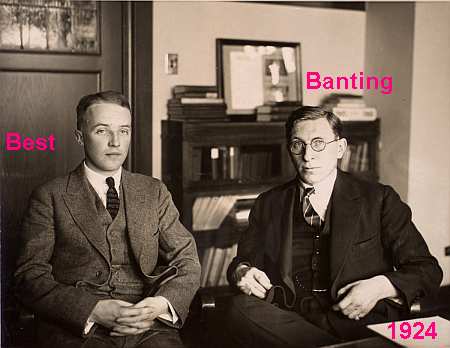 Did somebody mention Insulin and Banting & Best? Check out this essay about the miraculous power to cure diabetes from B&B's break-through <heart warming>.
Posted by BobTheScientist at 07:37