Chick sexing down the tubes

There are strong evolutionary pressures to have an equal 1M:1F sex ratio. Disagreeable British geneticist RA Fisher explained the algebra of XX = XY embryos in the 1930s. In the wild this sex-ratio is the best solution for ensuring success in the natural selection next generation lottery. Agricultural practice does not always find this the best for efficiency or profit. As we saw in cattle: bull calves are better for beef [testosterone makes muscle quicker] but completely useless for dairy. But in a dairy herd half the calves are male unless you use sexed-semen or some other way of subverting the natural order. At least the surplus male calves have some residual value at the mart.

Not so in the chicken industry. Here the competition is fierce and the margins are really tight in the relentless drive for cheaper goujons. Particularly in industrial hatcheries, where the product is 300+ eggs a year from each laying hen, male chicks have no capacity for making money and are disposed of before they literally eat into the profit.  Problem is that, to you and me, male and female hatchlings are impossible to tell apart. When we had chicks we had to wait weeks until the adolescent males betrayed themselves by their obstreperous bullying and we could send them off to René for the pot. No commercial operation could tolerate so many useless mouths for so long. Since the 1930s, by careful scrutiny of the rear-end of 100s of hatchlings, it was realised that males have a pimple in the vent that is reliably larger than in females. In most females no 'eminence' is discernible. But there are a significant number of edge-cases where there is a small bump. The company wants to sort these difficult cases with as much accuracy as possible because errors either way will cost money. Enter >!ta-RARRR!< the Korean chicken sexers.

For some reason, traditionally Koreans and Japanese have this job-specification sewn up. Although as there are non-Japanese sumo wrestlers, I'm sure that other nationalities have shouldered there way into the profession. Here's a chap from West Africa = 10.5 chicks in 37 seconds. I guess the main thing is to prevent repetitive strain injury as each chick has to be picked up, turned over, poked with the pinkie and cast into one of two output streams. If you say Selektion in German it will bring up a welter of WWII associations. The casual ruthlessness gets a bad press among sensitive consumers - although they like eating cheap chicken and don't want to look too closely at their complicity in the process.

There are other methods for sexing chicks. In some "slow-feathering" strains the wing feathers develop at different speeds in males and females, so trained operators can sex the chicks by comparing the lengths of the primary and covert feather stumps. And the Silver gene S is carried on the sex-chromosome, so if you cross an S female with a ss male you'll get a) a 50:50 mix of silver and gold chicks b) which are exactly consonant with gender c) in a way that a child of six can tell the difference. But adding these genetic markers to the breeding mix may impact on direct economics of chick production. The standard now is an astonishing 41 days between hatching and packing for broilers.

Now Prof Dr Almuth Einspanier at U. Leipzig has developed a consumer sensitive pre-hatching biotech diagnostic to accurately determine the sex of chicks 9 days after fertilisation and so 12 days before hatching. The stoutly maintain that, at that age, chicks don't have the neuronal capacity to feel pain. The German market, like the American death penalty market, is all tied in knots about this aspect of the process. It would be uncontroversially humane if those sensitive-flower German consumers just stopped eating chicken then they wouldn't have to implement a high-tech solution to clear their conscience. Einspanier's test hinges on the fact that estrone concentrations are higher in the allantoic fluid of female chicks. A coloured anti-body test for hormones is well-established - think pregnancy tests - but there were other logistical problems to overcome. These mainly dealt with methods to remove a sufficient quantity of fluid from the egg without compromising the internal sterility and also minimising the time out of incubator. It came down to lasering a 300μm = 0.3mm hole in the shell and the inner membrane and squeezing out some drupples of fluid: 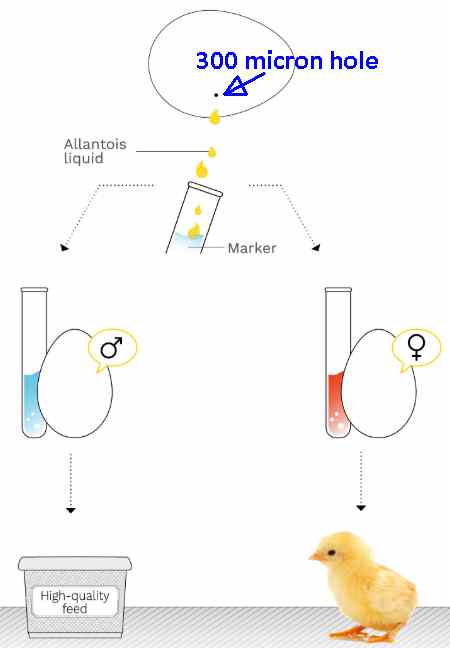 Blokes may sub-consciously accept the fate of the cocklets: "high quality feed"? that sounds okay because it glosses over the fact that the discarded eggs are the feed. Eggs produced in this way are now on the shelves in at least one German supermarket chain. They are selling well. But it's another layer of uncertainty to try to incorporate into our clear-conscience shopping. In Aldi you can buy eggs OR organic eggs OR free-range eggs. But not as far as I can tell organic & free-range eggs. Is free range better than organic? For me? for the pullets? for the planet? And where do you rate pain-free eggs?
Posted by BobTheScientist at 07:48