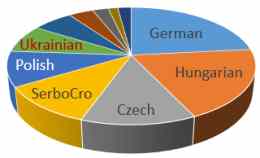 Week 3, term 2 ✓.  25% of my hours this term are on the remedial maths axis. That's not to say that all the people in the room need help because their math-anxiety is overwhelming: some appear to be both competent and curious about the edges of my competence in, say, MS-Excel. I can usually amuse such students if I ask them to plot a pair of unlikely variables against each other and maybe calculate a correlation coefficient. In class on Friday, I looked over the shoulder of my willing-and-able Magyar-Irish student, to see a map of early 20thC Central Europe! It was a long way [110 years and 2,000km!] from the class assignment, but he said he was making a pie-chart of the ethnic diversity in the Austro-Hungarian Empire prior to Sarajevo 1914. Well, that's at least as valuable a question as my madey-uppy dataset of Iron and Zinc concentrations. His graph [R] was particularly interesting to his Polish-Irish neighbour who hadn't previously appreciated that 5 million Poles had sworn fealty to Erzherzog Franz-Joseph the Last. Imagine how interesting it must have been living in Vienna or Budapest in 1910 - so many languages, so many cuisines, such a variety of dress and dance and song. Hark! the strains of the contemporary march "Die Bosniaken kommen".

Voices off: Don't mention the Axis! That's the next War. Sorry, lads, I've started on Axis [look at the post heading f'chrissake] but a very different beast altogether. If you've been reading The Blob since it was born 6 years ago then a) you are in a very small set b) you might be forgiven for thinking that The Institute has but one teacher - by the name of Bob. That is not true of course but reads that way because of an early policy decision to preserve [a thinly veiled] anonymity and therefore allow me considerable freedom to tell it like it is. Thus The Blob has reported on events in my classrooms and labs; on visiting speakers and other public events; on some of the absurdities of management; on what I read in the papers . . . but decided I wasn't going say anything negative about my teaching colleagues or the secretarial staff or the technicians. There have been times when I've been disposed to write about these people because they had really annoyed me, disrespected the students, or failed spectacularly to do their job: but I've held fire. De collega nil nisi bonum, eh?

In October last year I had a "difference of opinion" with two of the other lecturers about the conduct of final year research projects. It was quite surprising to hear this first coming at me by scuttlebutt through intermediaries and very surprising when it came up and was minuted in a Faculty Meeting a few days later. But it didn't surprise me that one of the youngsters had chosen a Jacques Bonhomme open-forum approach while the other had preferred a tittle-tattle SoS snark of snake route. Each fellow was naturally behaving to type. Predictably these events caused a mild shit-storm of indignation - who would be next for trial by innuendo??  There was a bit of an enquiry as to whether there was any substance in the allegations: if there is going to be bad-mouthing in the scientific community, then it would be scientific to have the allegations both fact-checked and evidence based. Last week we had the next Faculty Meeting, when I was expecting the issue to be put to bed. But it never happened. That was partly because a far bigger management shit-storm blew up which took a lot of deliberation to decide about. But it was also because I didn't feel righteous enough about the disagreement to insist on another difficult discussion eating into everyone's dinner hour. 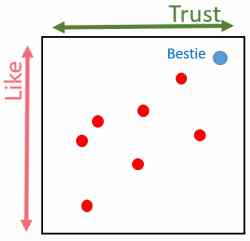 When I got home in the evening The Beloved and I talked over the non-event and I said something about being spineless nice to people because I liked to be liked. I had for example dropped in on Jacques B, whom I like and respect, the evening before the meeting to say "I just wanted to reassure you that I don't intend to get all shouty tomorrow". He had apologised (twice) and I didn't want the poor chap to lose sleep worrying about an Ordeal by Faculty let alone the far more frightening jihad by Baobab al Antiquam. TB said that, in her life, she found it easier to take adverse comment if it came from someone she trusted. That sounded a little redundant to me because I thought that 'trust' and 'like' were essentially the same; while she seemed to be claiming that they were on orthogonal [independent, at right angles as L] axes. If they are really independent, I said, we should be able to fill the bottom-right and top-left corners: people whom we trusted but didn't like much and/or people we liked but didn't trust. YMMV but I was scabbling to find examples.

For about 10 years I was the father of teenage girls, who were thankfully triple-M monogamous and minimally moody through the walking-out process. A couple of weeks ago, I was talking with another father-of-girls and asked "Is D still going with that Most Unsuitable Bloke From Enniscorthy MUBFE?" Apparently not, he'd been dumped a while ago (and good riddance). I then asked The Dad if any of the parade of dated lads were liked by the parents  - even if they were considered to be unsuitable for their daughters. Didn't get a coherent answer to that one but it seems possible:- young feller who is polite, helpful, deferential and funny but also feckless, spendthrift, and far too frequently drunk. People are complex and interesting because they are multi-dimensional.
Posted by BobTheScientist at 07:18