Surely the Earth is worth a fart

I was listening to RTE's Countrywide, the weekly farrrrming programme, on Saturday morning. You can listenback too. Properly, in a week releasing a worrying report from the IPCC about Climate Change [prev bloborant], they had a piece to allay the fears of Ireland's 100,000 cattle farmers. Yes, there are 100,000 such farmers, with an average herd size of 60 head, that's a large, vocal, and culturally embedded constituency.

What do I mean by culturally embedded? Eamonn dreadValera, author of our Constitution privileged certain attributes of "the Ireland that we dreamed of, would be the home of a people who valued material wealth only as a basis for right living, of a people who, satisfied with frugal comfort, devoted their leisure to the things of the spirit – a land whose countryside would be bright with cosy homesteads, whose fields and villages would be joyous with the sounds of industry, with the romping of sturdy children, the contest of athletic youths and the laughter of happy maidens, whose firesides would be forums for the wisdom of serene old age." Cattle farmers are implied here. not so much 100,000 first-language-Polish, 100,000 BLTs, 100,000 scientists, 100,000 people with depression. 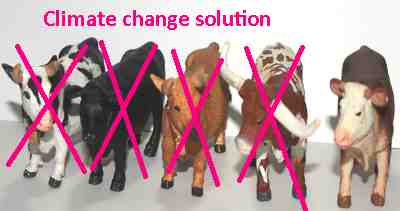 Countrywide tracked down three Heads to talk about the issue.

St Mary of Robinson, our once-upon-a-President, acknowledged that she was going to have to eat less meat if she was going to be able to live with herself. Throw-away line: "the only red meat I eat now is lamb from the West of Ireland".

Alan Dukes, one time leader of Fine Gael, Min of Agric 1981, Min of Transport 1996, was disappointed that the present generation of his party is heedlessly partying on and refusing to grasp the unpopular and uncomfortable nettle of carbon tax. His substantive point was that we'd all be a lot better off if we kept the meat local and didn't add to its carbon foot-print by trucking it all over Europe between pasture and plate. This is essentially the argument made in Simon Fairlie's book Meat: a benign extravagance, which I mentioned last year. Whatever about food-waste, we're not so keen on cabbage stalks, orange peels and black potatoes: but pigs will scoff all that down happily and convert them into sausage and blood-pudding in time for Christmas. There is a place for local meat as part of a holistic cycle of birth growth and death.

Mark Howden, vice-chair of IPCC, was woken up in Canberra, Oz to account for his report. He was brilliant: measured, relentless, informed, reasonable. Hi substantive point was that, IF we did nothing to change our life-style AND we wanted to keep carbon climate below 1.5oC THEN we'd have to set aside an area the size of Australia [80x the area of Ireland] to grow trees rather than food in the hope that they would suck CO2 out of the air and convert it into biomass. That sort of works but surely it just buys time. Sitka spruce Picea sitchensis the fast growing tree of choice hereabouts will be at maturity in 40 years time . . . and then what do we do with 800 billion tree carbon-rich trunks? [Oz = 8 million sq.km.; 100 hectares in sq.km.; 1000 trees per hectare]. What would you do with your quota of 100 tree trunks 30m tall and too big to reach your arms around when you hug them?

But again Howden was reasonable about putting forward the maths: trees aren't planted on the wheat fields and rice paddies but shuffled off to the margins and uplands . . . where they have a positive good in stabilising the soil and preventing landslides when the tropical storms ride in on a wave of precipitation. IF we did a little now to reduce food waste in the supply chain, in our own kitchens, through the back-yard pig THEN we won't need the whole of Australia, we can leave New South Wales for the last few cattle ranges. If we did a lot now: give up the hamburgers, give up the car, give up the central heating we'd be healthier and happier. Less fat, less constipated, more virtuous. Imagine eating tasty veggie samosas every day? or alternating with caldo verde? we'd never want to eat through a white sliced-pan ever again - even if we could use the toaster.

Note on pedantical exactitude. With cows it's not the carbon dioxide but the methane which is 20x more effective at global warming. With methane, it's not the farrrrts, because 95% of the methane is produced by microbes in the rumen at the other end of the digestive tract.

I'll add eating meat every day to the list of things [with boxing, slavery, beating children, voteless women, rightless gays] that our future selves will wonder "what ever were we at?"
Posted by BobTheScientist at 07:40