We taught them but they didn't learn

Sorry but I have more [prev] to say about hot, pressurized steel cookers called autoclaves which have to the potential to be a buehm, special delivery were you expecting one?. At The Institute, if we are worth anything at all, we are sending technically competent people out into the world of work. A Certificate, Diploma or Degree from us should carry a belief that The Bearer is a Good Pair of Hands. Knowing how to spell [deoxyribonucleic-acid is a very long word, how do you transcribe it]; knowing the molecular weight of ammonia [17]; knowing the Latin for mouse [Mus musculus]; are all at nothing without being reliable, careful and accurate with equipment.

For all my tough talk, I never did make my third year students write an SOP [standard operating procedure] for the autoclaves which we used every week in F&F - Food and Fermentation Microbiology. This was partly because my services were not required last year for that course because we could only muster 30 Yr3 students. We are back to 3 lab-groups again this year and the course starts today. But I'll be sure to implement my cunning plan of appointing a rotating Autoclave Liaison Officer each week who will, under my eagle eye, load and fire up the autoclaves; so that they have something to pour into their Petri dishes.

Earlier in the week I had my first session supervising wet-lab research projects. I have set my own nine [computer] project students going in their several directions along the edge of the frontiers of science. They have a longer, less intense schedule, so that both lots have a nominal 180 contact hours to make their mark on the world of understanding. If you want, you can treat supervising wet-lab research projects as a dosser's hour between more intense classes: some of my colleagues catch up on marking, some read the newspaper, some prep classes. The only requirement is that there is an adult in the room as the students trick about with potentially dangerous materials. If something goes wrong, we-the-adults should be there and should know what to do, who to call, if something goes wrong. I hadn't been in the job a wet month when one of my people sustained an acid burn. Two years later we had two hot-glop accidents involving students who had been trained <ahem>in the correct use of the autoclave.

My inherently nosy and curious nature would rather find out what the students were doing in their projects than read the newspaper and I hate marking lab books. I therefore made the rounds to find out the aspirations, or at least the game plan, for the three students who had rocked up to class on the first week of project work. In the previous hour two of them had made up some agar and set it all going in the autoclave to sterilize the stuff. Several things were amiss: 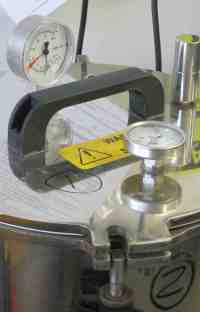 At that stage, my hour was up and I had another class to teach. But at the first opportunity I sent a warning e-mail to all the project supervisors: "I’ve just had my first hour i/c the Project Students. Please don’t assume that any of them know how to use an autoclave safely. Bob O’Barophobia"
Posted by BobTheScientist at 07:40