My Family are pretty careful now about what they tell me because my response is often to whack it all down in The Blob. Dau.I was outraged because I mis-remembered one of her anecdotes to make a slightly better story. Anyway, The Boy's Beloved TBB, sent her science-end family a link to a video of an old friend of hers explaining his science. Here he is;  Cambridge educated; looking (in the beard at least) like a young Socrates; working for the Medical Research Council MRC in Glasgow; must be smart: 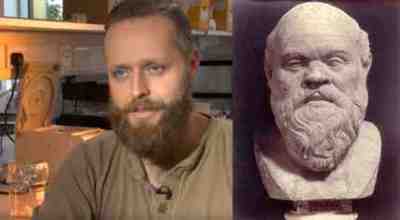 Despite the absence of a white coat, you can tell he's a scientist because there is a bench centrifuge behind his right shoulder near some tin-foil and glassware. 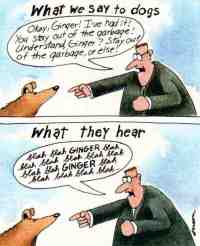 Well, I watched the video - it's about 80 seconds long - and I could only understand one word in the first 20 seconds. That word was interferon and Dr Watson used it 5 times in that period. For the rest of it I felt like Gary Larson's dog [L: blah blah interferon blah blah blah interferon blah blah]. I spent a large chunk of my research career studying and comparing interferons in a Comparative Immunology lab. They are interesting because there are a lot of them:
Type I: α-IFN, β-INF, IFN-ω, IFN-κ;
Type II γ-IFN,
Type III: IFN-λ
When they were first discovered it was headlined that they kill viruses. But actually their task is to mobilise a cascade of other genes - called interferon stimulated genes ISGs - which together kill viruses. Part of their effectiveness is that the diversity [N=20+] of the interferons, allows for a subtle and effective response to the wide range of viruses to which we are prey. On the third viewing, with my back-ground in the field, I was able to understand and appreciate what Dr Watson was doing to make our world a better, safer place.

Writing a Lay Summary, pitched at intelligent educated Outsiders, is a task all scientists are now expected to carry out every time they apply for more money. A Lay Summary should be pitched so that an educated person, outside your own field, can understand the significance of your proposal. Ideally it should convince a majority of politicians that Science is Worthwhile. My experience is that scientists are almost usually crap at this task and their Lay Summaries just reorder the words of the Scientific Abstract, which is written for Insiders in the same field. This is my Lay Summary for the vid:

Once upon a time there was a fertilised egg that copied its DNA with great precision and grew and divided and became two cells, four cells, eight cells . . . 30 trillion cells. All full of nutritious gloop and a fully functional DNA replication apparatus. We wander around in a waft of viruses; coming at us in snot-aerosols and covering our lunchtime chicken sandwich. Most of the time our immune system knocks these buggers on the head before they can invade some of our cells, subvert the replication machinery, make copies of viral DNA, fill the cells with infective particles that can go and infect more of our cells. Viruses differ from bacteria because they must invade a cell in order to replicate. When a virus evades the immune defenses and starts on its own jihad then we fall sick . . . partly because the inflammatory / immune system over-works to get back on top of the situation.


Interferons [prev] are key to our immune response to viruses: they _selectively_ mobilise genes which will fight the good fight on our behalf. But every virus is different and only a subset of possible immune responses will be effective against LCSV [lunchtime chicken sandwich virus]. Dr Watson's mission is to identify which of the 500 genes mobilised by interferons are precisely effective against LCSV while leaving innocent bystanders standing. Working in Glasgow is desirable/smart because they have vials and vials of different viruses with which to play destructive games. IF the ships keeps coming in from funders like MRC, NIH, Wellcome; AND he uses the money wisely AND he makes some of his own luck by hard work and focused attention THEN millions of sick black babies in Africa will benefit from his life's work.

Now that 'explanation' might be no help at all at all in understanding what Sam Watson has to say about his life's work.  But that's my point: the curse of knowledge kicks in if you have deep knowledge about something - it's impossible to imagine what it was like before your acquired all that knowing. We have to work really hard, questioning our assumptions, to explain something in our field of expertise to a barbarian without the gates  [barbarians? gates? = Cafavy!]. It makes you wonder whom U. Glasgow's Centre for Virus Research thought would be watching their vids [there's a few]; whether their Effectives were briefed as to the expected audience; whether the script was presented to an intelligent high-school kid for comment.
Posted by BobTheScientist at 07:24