Fair Isle, of which we wrote recently, is absurdly small and remote. The next island South is the slightly smaller (690 ha. vs 780 ha.) North Ronaldsay about 40km SW. Fair Isle is famous for its knitting and the rich diversity of its bird-life. North Ronaldsay is famous for nothing-at-all but in the news last week because the school closed . . . as all Scottish primary schools do at this time of year. The difference here being that a) there was only one pupil in the last academic year and she is going on to secondary school in Kirkwall this September. Accordingly the North Ronaldsay school won't be opening after the Summer break. It's like the joke about the notice which appeared outside a village library "Library closed, somebody borrowed the book."

That's kind of sad, in an end-of-an-era sort of way. As recently as 1977 there were 17 primary school pupils in the school. The departure of Teigan Scott is part of the general trend of rural depopulation in the Highlands and Islands because EU food economics have tilted the playing field in favour of French mega-farms growing golden delicious apples and oats being grown 'only' in Poland and Finland. It is, accordingly, difficult to make a living off the poor thin soils of North Ronaldsay and the surrounding, over-fished, seas around the island. So the young go off to become electrical engineers and quantity surveyors and never come back. at its peak in 1881 there were 550 people living on the island a count which steadily declined to about a tenth of that today.

It would have to be a very slow news day for such a local event to make the news in France, Indeed it only makes the national newspapers and the BBC because the story is cutely nostalgic. It helps that young Teigan is symmetrical too, of course. I wrote about a similar story two years ago where the two pupils and their teacher travel to Sherkin Island for school each day. The teacher is paid to do this by me-the-tax-payer because educational politics sees this sort of micro-school as desirable. Finding another resource teacher in a ghetto deis school in Dublin or Limerick is, contrariwise, just regrettably beyond the budget of the Department of Education. 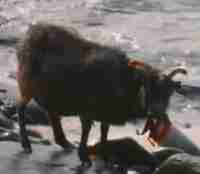 Actually, I was woeful ignorant in saying nothing of interest happened on NR. It seems that the local breed of sheep [R getting a mouthful of traffic-cone kelp Laminaria from the foreshore although they prefer dulse Palmaria palmatta] developed a taste for seaweed along the foreshore and by dint of eating this iodine rich food source acquire a distinct ' gamey' flavour which, like other Northern dainties like lutefisk and guga, is an acquired taste. It is the only vertebrate than obtains sustenance from algae. As the sheep adapted to the diet they became less efficient at digesting grasses. If they don't go extinct, we probably have the makings of a reproductively isolated species there. The sheep are kept on this algal diet by a huge dry-stone wall circumscribing the island, which needs constant maintenance to ensure genetic purity of the  wild and wonderful combination of genes, digestive enzymes and gut microbes which allows the continued exploitation of this niche dietary resource. You can contribute. Nice films: diet - shaping the island.