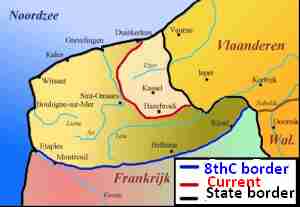 Language allows you to communicate with others and conversely hinder your communications with The Other.  Most of us could get a fried egg sandwich at a diner anywhere in the world without having a word of common language. There may however be limits to the dialogue you have with the waitron about the fact that her apron is dirty or that it is raining stair-rods outside and sorry for the puddle.  There are still about 20,000 French citizens whose first language is Flemish. They live up against the Belgian border from Dunkirk south and east including Kassel and Hazebroek. These are all quintessentially Germanic names. These sort of place names spread west as far as Etaples and including the channel ports of Calais = Kales and Boulogne = Bonen. I think that sort of peculiar diversity should be cherished, not least because Fremish is quite different from the standard Nederlands of Den Haag and Amsterdam. You can see a similar retreat in the genetic, linguistic and toponymic hegemony in the shrinking Basque lands in the very opposite corner of France. A few years ago in a Lingo Quiz I invited readers "Draw a tree of relationships among the languages spoken in Metropolitan France: Alsatian Basque Breton Catalan French Occitan (we'll spare you having to slot in Tuareg, Vietnamese, Arabic)."  At least vlaams / vlaemsch are both Indo-European languages descended from PIE, so if we furrow our brows and are familiar with some antique forms of our own language and it matters we can have a conversation with another IE speaker. I remember carrying on a long discussion in a Navarrese church-yard about the process of pilgrimage in my français affreux with a German who was similarly prepared to mangle the language of Baudelaire and Zola. You probably know more Klingon than Basque, though - that's on a totally different tree.

Although it is spoken by people with a better tan, Punjabi is more similar to English than either is to Basque. The first two named are both branches on the great Indo-European tree. Someone, possibly not GB. Shaw said "England and America are two countries separated by the same language!". Punjabi, by contrast, is one language separated by two scripts. I'm primed about this because The Boy's Beloved TBB grew up having to rollick along in Punjabi because that was the best way to converse with her beloved maternal grandmother; who had been born in British India, spend a working lifetime in Kenya and washed up in London as the tides of empire receded in the 1960s. But I was more immediately jangled by a nostalgic report in the Guardian about exiled Punjabis who have been living in Dehli for 70 years since the partition of India. Warning: the report switches into harrowing eye-witness accounts of the process of partition and reciprocal atrocity. That would be today 14th/15th August 1947.  I've written about the maths of partition in the wake of the Radcliffe Report and his bloody, bold and resolute line across the map of the Raj.  As a wonk, of course I want to know about the maths of similarity between Hindi, Urdu and Punjabi. They say that Hindi and Urdu are effectively the same language but that Punjabi is different. 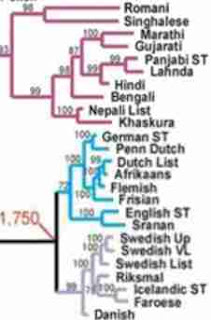 It's not easy to abstract those data from the interweb, although here is a rather pretty 19thC-looking tree of IE languages on their separate branches with the leaves approximately equivalent to the number of speakers. That should remind you of the zoomable map of species relationships on the Tree of Life [bloboprev]. The GoTo source for quantified inter-language similarity is a 2003 Nature paper by Gray and Atkinson from which I have editted the two branches shown [R]. From this, I am 'confident' that Punjabi and Hindi are about as different as German and English. Which in my experience is not too difficult to penetrate, especially if you are reading rather than trying to follow dialogue in real time. French and Portuguese are of a similar level of difference. You can check out the whole Gray and Atkinson tree [not too badly reduced and pixellated] here.  Of course, if you were reading, you'd think that Hindi and Urdu are totally different lingos, because they are written in different scripts; but parking jingo, it is sensible to treat them as dialects of a single language called Hindustani.

Punjabi is likewise a single language spoken by 75 million people living in Pakistan, 30 million in India and maybe 2 million in the diaspora [mostly UK and Canada] It is unhelpfully written is two different scripts Shahmukhi [from the king's mouth] and Gurmukhi [from the mouth the (Sikh) Guru Angad].  Shahmukti is clearly derived from Perso-Arabic, written right-to-left and used in Pakistan; while Gurmukhi is written left-to-right in India mainly by Sikhs.