We have Dau.II staying for a few days [home is where they have to take you in, when you have to go] which is pleasing. In consultation with her sister, she made us all sit in a row on the sofa last night to watch What we Do in The Shadows [trailer] a mockumentary in the Spinal Tap tradition which follows the trials and tribulations of a group of vampires sharing a house in Wellington NZ. It features as writer, actor and producer Jemaine Clement from Flight of the Conchords: an acquired taste which I share. One of the funny scenes in WWDITS hinges on the fact that the boys need to primp themselves up before going out on the town but, being vampires, the mirrors don't work; so they have to help each other out as to hair-style and costumes. Me, I'm a vampire with the mirrors - I just never look in one except on the rare occasions [full moon coming up] when I am trimming my facial hair. But I know people, men and women both, who spend a chunk of each day occupying the bathroom checking that their eyebrows are still present.

Two snippets which recently appeared on the blogosphere suggest that I should really spend more time in front of the mirror to find attractive people to hang out with. The first is a study, originally from Plos One in a paper called Is Beauty in the Face of the Beholder? Here a bunch of couples were asked to rate how attractive they found photos of their partner. The researchers photoshopped the images to include an increasing percentage of the viewers own facial features. The answer is that you like your partner best if they have about 20% You about their image. Like Goldilocks - not too much because we're not into incest but not random because that would be miscegenation. The scale on which these two sins are balanced varies according to cliché - backwoods swampies are always shagging their sisters but lynching any tanned chaps who want to take those sisters to the store for a soda.  I got annoyed that the optimal % similarity is reported as 22% when there is a detail-swamping amount of variation in the data: better to call it a fifth 1/5 or 20%. 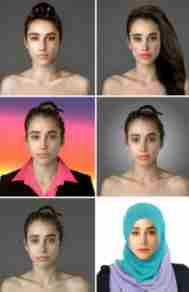 This basic idea was picked up by a bunch of tech whizzes at National Geographic who used covert surveillance cameras to capture faces and photoshop them, on the fly in real time, into test images on a bank of ipads. The punters rated images that incorporated some of their own features more highly that unretouched pictures. What disturbs me most about this is the technological possibilities in a world where CCTV cameras watch our every move [more in the UK than any other country by all accounts]. The Nat Geog study implies that operatives can, on the fly in real time, modify the CCTV footage of a robbery so that the perp gets a darker complexion. The pictures on the left are from a Buzzfeed study where the same woman had her self photoshopped by experts across the world to establish Global beauty standards in 25 countries. There's a bit of cliché here too: guess which countries cover those naked shoulders. But there are also some useful controls where different photoshoppers from the same country have come up with a different gestalt for beauty. I guess there is something in these investigations but we really need to polish up our crap-detector when assessing the results: reject studies with inadequate controls or too small a sample.

A rather different example of self-love popped up in a featured article in Wikipedia a couple of days ago: The Letter Name Effect. The science of letter preference started out in the world of marketing. If you want to sell more laundry detergent what letters should you have on the packet: is it better to call the stuff Swamp, Surf, or Sodium-triphosphate? It turned out that the letter prefs varied according to whether they appeared in the punters own name: the initials, yes, but also the letters that came in other places in the name. Jozef Nuttin, from Belgium, started the scientific ball rolling in 1985 when he noticed that he preferred car licence plates which included J, Z, F and N. That study has been replicated numerous times, with different alphabets, in different places. The effect is sufficiently strong that it has been used as a measure of self-esteem: if you don't rate yourself you don't recognise your initials. Apply skepticism to these tail-wagging-the-dog meta-studies.


Posted by BobTheScientist at 08:57