How many of us find our true selves or our métier before we die? We are born into a family of dentists and become . . . a dentist, or, kicking over the traces, a doctor. If your folks went to college, it takes a particular determination, or a Richard Branson dyslexia, not to go to college yourself. Almost all people born Catholic, die Catholic and it just stretches credibility that some of them wouldn't have been happy Lutherans - who, after all, make the best pork sausage. A while ago, I wrote about one of my most outstanding students who left science immediately after obtaining her summa cum laude to run a climbing shop in the English Lakes.  It's a problem for the multi-talented to figure out which one is going to earn them their living - unless you're a pianist in which case your day job will, with 99.9% certainty, give you more money. As John Spillane quipped the other day "What's the difference between a pizza and a musician? A pizza can feed a family of four". The aching dilemma is very well expressed in Somerset Maugham's story The Alien Corn, which ends in tragedy.

Even people who were born after the last one died can probably name the Marx Brothers: Chico, Harpo, Groucho and the Other One. That would be Zeppo, the youngest. There was also Gummo, who was never in the films, but was a successful theatrical agent; you'll be in good company if you've never heard of him. You'll also be in good company if you didn't know that Zeppo, the slightly boring straight-man and young romantic cipher of the quartet, was an inventor who made $million$ through his engineering company Marman / Aeroquip. He came to his engineering talent early, keeping the family car in working order. 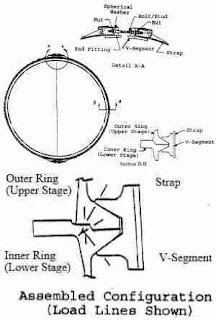 When he stopped acting, he partnered his brother Gummo in the agency but also started his company which is most notable for developing and marketing the Marman Clamp [R from NASA engineering specs]. These clamps consisted of a ring with an internal V-shaped notch that seized together the ends flanges on the end of two connecting tubes, As you tighten the strap with a turn-buckle the V-notch forces the two pipe-ends together in an elegant appropriate technology non-leaking joint. Here's 21stC engineer show-and-telling why Marman flange clamps knock the alternatives into a cocked hat. The company got a boost in engineering circles when it became known that Marman clamps were used to secure and transport the second Nagasaki atomic bomb code-named Fat-Boy. Doubtless, Marman clamps were used to connect the exhaust pipe of the company's 1948 motor-cycle the Marman Twin. The design of the flange clamp was so solid and so simply effective that you can still buy them today.

Zeppo was also waaay ahead of the curve in thinking about and developing on-body health monitors. In particular he secured two patents for wrist-watches that could detect irregular pulse-rate and warn the wearer before a defibrillator was needed . . . or indeed widely available. Damned clever, altogether. It could have turned out that Zeppo stayed in films because that was available; the world is a better place for him finding another talent in his toolkit. There's an iconic story about finding your true level by Somerset Maugham [prev] called The Verger: you can read the whole thing in about 8 minutes. This should remind you of another actor who shone in STEM: Hedy Lamarr,
Posted by BobTheScientist at 07:18