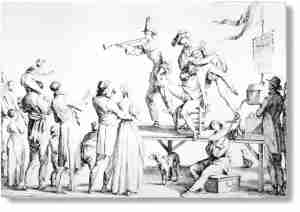 I was on and on [TMI, I daresay] about my wisdom teeth which were uppermost in my mind last week and bottom-most in the discard bin at the dentist. I was sharing the info about their abstraction with my twin sister and she airily asserted that she'd shed hers 30 years ago when she was briefly a student in Minneapolis and could get them out for nothing-at-all. That's an interesting view on health-care in the USA where medical bankruptcy is A Thing. In my life-time, with fluoride-in-the-water and other measures the policy has been to keep as many teeth as possible for as long as possible. In times past toothache was a scourge and drilling dentistry was an expensive luxury, so tooth-puller was A Trade aka L'arracheur des dents [from which I have lifted the picture R].  The tooth-puller was an entrepreneur and impresario who would travel the fairground circuit offering instant relief with a variety of medieval implements. If you're into pain, Theodoor Rombouts and Caravaggio were among those who painted this everyday story of medieval folk. It is probably true that the rise of such rough dentistry as a profession was coincident with the rise of the sugar trade in the 17thC.

It is almost beyond comprehension now but, in the 1950s, both my parents (b 1917 and 1920) were persuaded to have all their teeth removed because they were 'beyond economic repair' and replaced with dentures which were billed as the modern, hassle-free solution to all dental problems. That's sort of okay except that dentures themselves can be quite high-maintenance. Pat the Salt complains that hot food melts the dentifix adhesive so he tends to use his partial dentures for company and going to mass rather than for chewing. As you age, there is quite a lot of bone turn-over and restructuring including the palate and jaws and the dental plate of your 70s may not fit your 90 y.o. mouth so well.

My mother recently experienced a different denture malfunction. She lives in a village in remotest Dorset in SW England. A few hours after a significant spill of rain upon the downs above the village the piddling stream, appropriately named the Wriggle, which runs past the pub becomes a raging torrent that floods the lane on which my aged mother lives. That's an inconvenience and so checking the water-level has become a sort of reflex for many of the villagers. aNNyway, The Mother went off to collect her pension several weeks ago and paused on the bridge to gauge the depth of flow. While leaning over the balustrade, a sneeze came upon her suddenly and >!ptui!< her top dental plate was fired into the stream and set off towards the sea. That required three visits to the dentist which would never have happened if she'd held on to her own teeth back in 1956. otoh, the new dentures are a much better fit, that are therefore less likely to be explosively ejected.
Posted by BobTheScientist at 07:23