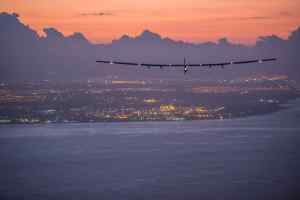 Isn't it gorgeous? It's the plane Solar Impulse Si2 coming into land at Kalealoa Airport in Hawaii [video] on one of the 15 legs of its round the world trip flying only on solar power and Lithium-ion batteries.  The plane started the voyage when it flew from Abu Dhabi to Muscat on 9th March last year: it's 770km and the flight took 13 hours at a respectable Model-T ford speed of 60km/h. Solar Impulse has a wingspan of 63m - about the same as and Airbus 340.  But everything else is different:
Solar impulse is neither fast, nor capacious but it's carbon foot-print is small. In June the plane flew from New York to Seville in Spain arriving there after 3 days in the air on 23rd June 2016.  The pilots (one at a time: no pilot-to-copilot chatter) and project leaders are André Borschberg and Bertrand Piccard.  You may remember this Piccard as one of the two pilots who circumnavigated the Earth in a balloon Breitling Orbiter 3 in 1999.

He is the third generation of Piccards to break records.  His Grandfather Auguste took a balloon higher above the Earth than anyone else before in 1931 and then broke his own record the following year. It wasn't solely as a dare: he gathered new information about cosmic rays from far above the breathable atmosphere.  His final height of 23,000m was nearer 3x the height of Everest than 2x.  Auguste's son and Bertrand's father, Jacques Piccard went down and down. He plunged a bathyscaphe Trieste to a depth of 11.7km and settled on the floor of the Mariana Trench in the Western Pacific.  You can't get lower than that. Those Piccards! The motto for the Olympics is Citius, Altius, Fortius, Faster, Higher, Stronger.  Maybe theirs should be higher, lower, cheaper. Although nobody is claiming the ultra-high-tech Si2 is cheap. but it is trying to be a prototype for a different way of travelling.  Less noise, smaller foot-print, slower.  As Bertrand Piccard put it "I went in search of new ideas blowing in the wind, to try and live better on Earth in my roles as doctor and human being."

Circumnavigations? Si2 aims to complete the round-trip to Abu Dhabi within two years of starting, which is leisurely, but it could be slower: Steve Smith and Jason Lewis took 11 years; or could be faster it took Nellie Bly 72 days.  Of course Dick Rutan and Jeana Yeagar zipped around non-stop in 9 days just before Christmas 1986.

And yes Trekkies, there is a [tenuous] connexion between the Piccard family and Captain "Boldly Go" Picard.


Posted by BobTheScientist at 06:51