For as long as I can remember I have, despite having a British passport, been a republican. Kings and queens are sooo 19thC and the antics of the British royal family in the 1990 (annus horribilis etc.) made the whole thing into a raree show. Part of the problem was the celeb-ification of royals, along with footballers and Big Brother contestants by tabloids and glossies like OK!  Before the Falklands War, the press generally tugged their forelocks and didn't report the private indiscretions of the rich; since then every wart and peccadillo is in the public domain.
Quiz:
Q1. Which of these is not a celebrity gossip magazine?:
¡Hola! - Now - heat - Dink! - CLOSER - Hello!
Q2. Who gives a damn? 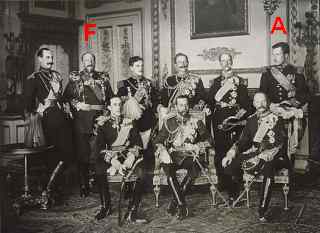 But last week I lost some of my marbles and wrote a piece about Leopold of Saxe-Coburg-Gotha and how he was head-hunted across Europe to be given free board and lodging and a carriage with horses . . . and a plumed hat, in various capital cities. He finished up in a palace in Brussels. His grandson (the point of royalty is that your children inherit the role, the funny hat and the carriage along with another cycle of accumulated inbreeding) is identified with A for Albert in the extraordinary 1910 picture of nine reigning European monarchs [R note the long symbolic penises swords trailing awkwardly along the floor of the chaps in the front row]. There's another Saxe-Coburg-Gotha in the picture identified with an F for Ferdinand Tsar of Bulgaria. They were both second cousins to UK King Edward VII whose funeral brought so many decorated chests to London for the photo.

Ferdinand's mother was Princess Clémentine of Orléans, an immensely wealthy, shrewd and ambitious descendant of Louis XIV Le Roi Soleil. She used her money and family connexions to blag a crown for her favorite son. She had to go to the furthest reaches of Europe to find a billet for her boy but eventually installed him in part of the disintegrating Ottoman Empire. To make it more convenient to visit the borders of civilization she personally funded a branch railway line to connect Sofia to Vienna and Paris. Ferdinand was not without assets having been trained as a botanist and entomologist. That makes it sound sciencey but I don't think it amounted to more than that fact that he collected pressed flowers and skewered butterflies. Clémentine was pushing at an open door because the crown of Bulgaria had been offered to Billy and Jack across the face of dynastic Europe before the local boyars voted Ferdinand in. Queen Victoria was shocked "He is totally unfit ... delicate, eccentric and effeminate ... Should be stopped at once." Sounds a bit catty, probably because her sons collected stamps rather than butterflies. The stamps turned out to be a very sound investment. 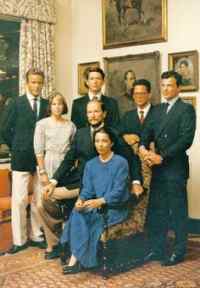 That line of Saxe-Coburg-Gothas contributed the Tsars of Bulgaria, in name at least, for the whole of the 20thC. Ferdinand's son Boris was head of state from 1918 to 1943. Bulgaria capitulated to the Nazis in 1941, but Boris led a concerted effort to prevent Bulgarian Jews from being shipped to Treblinka. He died of heart-failure, possibly poisoned, in 1943 after a stormy meeting with Hitler. His son Simeon was six years old at the time and still nominally Tsar. He was exiled from his native land and educated in Spain where the family was given asylum. Another dynastic picture [R] shows Simeon with his family wife Doña Margarita Gómez-Acebo y Cejuela and kkkkkids Kardam, Kiril, Kubrat, Konstantin & Kalina
In 1990, shortly after the fall of communism, Simeon returned to Bulgaria where his passport says he is Симеон Сакскобургготски [Simeon Sakskoburggotski]. In 2001 he launched a new political party, National Movement for Stability and Progress (Национално движение за стабилност и възход НДСВ) aka National Movement Simeon II, which swept to power in July of that year, so that on 24th July 2001, 15 years ago today, the Tsar became the democratically elected Prime Minister of the country which his Great Grandmother had bought for her son. The most vehement anti-monarchist can hardly object to that. If you're going to object to the fact that rich and privileged people get disproportionately elected to high office in democracies, you're objecting to a helluva lot of Presidents of the US and European Prime Ministers.


Posted by BobTheScientist at 08:16