Down on Sunday evening to spend the night with Pat the Salt as per schedule. M-F each week he has one of the HSE's redoubtable and tireless Home Helps HH come in the morning to help him perform his lever - a bit like Louis XIII getting out of the bed with its ritual and protocol and back again in the evening for the coucher which reverses the process to pack him back between the covers.  These last tuthree weeks he's gotten noticeably slower and so it was decided to take 'make him breakfast' off the HH's schedule, so she can concentrate on getting him washed and installing the hearing aids,seeing aids and chewing aids. Breakfast? I can do breakfast! Two slices of toast - using up the Benecol despite the evidence that it is no better than butter and twice the price; another cup of coffee and . . . if there is any, a small glass of juice. 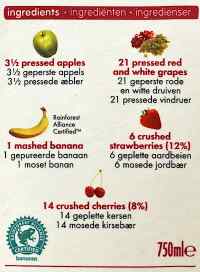 Juice?  There was an unopened litre of Tesco 100% Pressed Apple and Mango and the last glassful of a carton of innocent pure fruit smoothie 25% more strawberries and bananas.  I don't know <tsk!> what happened to a straight-forward 'glass of OJ' that was part of the ritual of American breakfast when we lived there. The smoothie only appeared in the fridge because it was yellow-stamp reduced NOW €1.00 was €3.99 !! My first gripe was the fact that innocent smoothies are sold in 750ml tetrapaks, so that price comparisons are not straight-forward. For the record Tesco value OJ is €1.12 per lt which makes it 84c /750ml.  So the fancy stuff is nearly 5x the reg'lar. Anyway, Pat chugged this concoction down while I read the packaging, hoping to find something else to get narked about [water the primary ingredient etc.]. But the contents seemed to be above reproach [L isn't quite what I was reading but the idiot's guide user-friendly cheery listing of Monday's carton had the same look&feel]. Innocent don't want to bamboozle their public with sciencey stuff like ml.  I'm all behind them really: 38 pressed grapes is sufficiently but not excessively accurate for something made in a 20 tonne vat.  The nutrition information is, however, given in grams and kiloJoules - it's the law.

Your transaction with innocentdrinks.com is a lot more complex that I have patience for. It's a marketing thang rather than a money-for-food contract. Does you >!good!< Our smoothies are packed full of fruit and absolutely nothing else. They are also a source of vitamin C, which helps you immune system does its thing. and then Does others >!good!< We give 10% of our profits to charity and most of that money goes to the innocent foundation. They fund projects in the UK and all over the world to help the hungry. And the intrusive bottom line so >!thank you!< from us, from your body and the people you didn't even know you helped. Ahem? I don't need innocentdrinks.com to intercede between me and my body. Me, I'd rather the company paid a fair price to their suppliers [and who knows they might do that] rather than siphoning the price off to tick feel-good boxes in areas that are peripheral to the business.

Innocent was founded by three Cambridge U graduates Richard, Adam and Jon in 1998. They weren't food engineers or farmers; they were then working in consulting and advertising.  The kind of people whom another Cambridge graduate Douglas Adams described as "A bunch of mindless jerks who'll be the first against the wall when the revolution comes". The three pals started selling their product at pop festivals and a cafe round the corner from their London offices. After ten years of hard-graft, they started their exit strategy in 2008 by selling 18% of the company for £30m to Coca-Cola. Five years later, Coca-Cola had acquired 90% of the company.  It's the sort of sell-out that will have journalists poring over the accounts and business practice with a nit-comb and a number of murky stories have emerged.  But I don't think that many companies would stand up to the kind of scrutiny that is usually reserved for US Presidential candidates.  If you can afford it, you may as well consume this stuff - it won't do you harm even if it gets a bit fizzy occasionally from insufficient Pasteurization. Not me, I have my teeth, I'll eat an apple instead.
Posted by BobTheScientist at 07:41