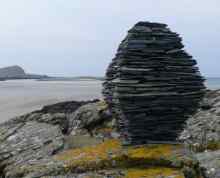 We've long been fans of Andy Goldsworthy's natural sculptures, which are a half-way house between found art and creating whatever you want through CGI graphics. Goldsworthy takes things from the environment and rearranges them to locally reduce the entropy, disorder and chaos of the universe. A lot of them are quite ephemeral, reminding us [second law of thermodynamics] that the entropy of any system tends to a maximum and all things must pass. He has produced a number of gorgeous coffee-table books filled  with pictutres that have captured his tweaks to the world before the next storm restores disorder.
I've spent a lot of time on beaches collecting buoys, rope and other flotsam & jetsam and bringing it all back home because a tangle of ropes, ruined nets and floats looks like a mess on the rocks.  It looks like a mess in our yard a lot of the time but at least it's not annoying the whales. I've recently decided that buoys are So Last Year Dahling and have started to bring back salt-bleached, storm-scoured tree branches with which I plan to make something arty - watch this space. If nothing else, we can eventually use this pile of sticks to cook a fine sea-food paella.

I'm not the only beach-combing obsessive. Chap from Switzerland André Quirinus Zurbriggen has spent the last many years casting his eyes about beaches looking for stones which seem to have letters imprinted. Our eyes are really good at discerning patterns in the perceived world; often above and beyond the call of duty, convincing us that order is present where it is just random noise. At last M. Zurbriggen has accumulated a complete alphabet and makes it available to the rest of us by creating an Ap that allows you to write messages using his stone typewriter.  That's different and not hurting anyone; so thanks from The Blob [R].  I was down on the beach last night after sunset but before full dark . . . gathering interesting wood and I found a stone with a lower-case L. Only another 25 letters to go.