On 15th July 1799, a slab of granite was unearthed from the ramparts of a delapidated fort near the town of Rashid at the mouth of the Nile. It had been put there by an ignorant Ottoman soldiery as fill for their defensive position. It is a dull record of tax exemption given to the Priests by the Pharaoh Ptolemy V in exchange for them validating his accession to the crown and indeed to godhead.

The key to the stone's importance is that it served as a key, because the officialese legal niceties of the political transaction is written in three languages: Greek, demotic [wot ve common ppl spoke] and antient/religious hieroglyphs, a form that was then only used in church. Think the Latin mass or Hebrew before the foundation of Israel restored that dead language to a vibrant and effective form of communication. IT's written in greek because the Pharaoh Πτολεμαῖος Ἐπιφανής was a descendant of a Macedonian Greek general who seized power in 303 BCE as Alexander the Great's empire collapsed. In Ireland we don't do hieroglyphs any more but all official documents are written in English and the de facto moribund Irish language - in any translation dispute hieroglyphs Irish takes precedence.  The Rosetta Stone features as part of A History of the World in 100 Objects [its podcast] by Neil MacGregor director of the British Museum [bloboprev]. I've also mentioned the stone in passing in my piece about Aimé Bonpland. 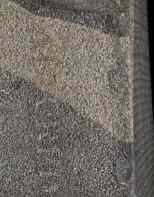 I've been meaning to write a blob about Champollion and Young and their cracking the meaning hieroglyphs code through Rosetta's simultaneous translation because eeee I do love a code Elvis - Venter - Eircode - DNA - ASCII - COBOL - Enigma - Playfair - Binfo - Bok. And I may find a hook to do a Champollion trib, but today it's about graffiti and history.  The Rosetta was unearthed by French soldiers and looted as spoil of war by the British a couple of years later.  It finished up on display in the British Museum. When I went to visit as a teenager - before The First War, kids - it was black with the incised letters helpfully picked out in white. Many people therefore believed that the stone was basalt. When it was cleaned in 1999, the stone was revealed to be a gorgeous twinkling grey granite with a pink seam running through one corner. The cleaning also drew attention to a fourth language [see L] etched onto the side: "CAPTURED BY THE BRITISH ARMY IN 1801".  After two hundred years, this defacement has become part of history and so seems less offensive. No archaeologist or restorer would have the temerity to leave their mark so permanently today.
Posted by BobTheScientist at 08:23