Hello my name was 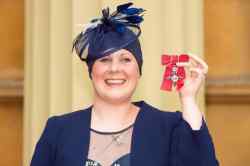 I regret to report that Dr Kate Granger, geriatrician, will never make it to become a geriatric having died on Sunday at the age of 34. [obit Reactograph, Grauniad] As I wrote in May, she was diagnosed with a fatal and essentially uncurable cancer at the age of 29 and given just over a year [median value for those with desmoplastic small-round-cell tumour] to live.  By engaging with the medical professionals and developing a determinedly positive attitude she stretched her remaining time to 5 years. While she endured what they threw at her to live, she wasn't going to be a passive doormat for the medics to play god-games on. For a doctor to fall sick gives a rare chance to pass through the mirror and see what life is like for patients.  Pretty rough, was the answer that Dr Granger came up with . . . and disrespectful. At least they might introduce themselves, she thought, and then Did I introduce myself at the bedside? In her sickness - she's wearing that fetching hat while waving her MBE [above L] because the chemotherapy has done for her hair - she found time to craft a legacy and make hundreds of new friends. She got a letter, for example, from 10 Downing Street a week ago “Dear Kate, My name is Theresa and I took over from David Cameron as PM last week.”  See my earlier piece for the #HelloMyNameIs . . . campaign.  She also raised her target £250,000 for cancer research in her home county.

Most doctors assert that they have to maintain an emotional distance as they poke our bodies with intrusive intimacy. If they get all weepy while giving bad news, it's not going to help. What Dr Granger wanted as a patient was not so much empathy as common politeness. Everyone has a role in the theatre of medical treatment: a good performance is when the principals - doctor and patient - generate some synergy, so that everyone involved ups their game.  Knowing each other's real name is start. Hellomynameis delivers one part of the contract, but the doctors have to remember and use the patient's name too. It just makes for a better outcome.

Kate Granger won't be bloggin' anymore here. A loss for us all. How we die tell others how to live.


Small small down there doctor joke below.
Posted by BobTheScientist at 07:18