As the world knows, the Irish Institutes of Technology become like the Marie Celeste or Flannan Isle during Summer.  The teaching staff take their weary bones off to shop in NYC or hang out in their dachas down the country because they've done their 600 hours of class. The technicians have to clock in as usual despite the fact that they have nothing to do but 'prepare for next year'. Yesterday, I made the schlep into work because there was free pizza.  I was a graduate student once, so free food [cheap cheap] is a bit of a trigger.  On the way, I twigged that the free pizza was for the graduate students (of which I own a couple) and far from getting free food I'd probably be expected to pay for some of it. Dang! But by that time I was half way there and committed so I carried on.

I was very glad because the first person I encountered at work was one of our technicians with a paper bag and a harassed look.
"Do you know about chickens?" she asked.
"Tikka marsala, Maryland or wings?" I replied; but this elicited no smile - harassed look y'know.
Turned out that, driving along the motorway - with her kids in the back - techie had seen a flash of yellow on the hard-margin and then another. That looks like a day-old chick, she thought. Which was not so weird because her older boy had spent the previous several weeks asking her if they could start to keep chickens. The car was stopped, the chick (for so it was!) was scooped into the bag, she drove on. Another chick, another stop. Another chick, another stop. One of the little scraps was clearly dead, so that was left for the crows but she had 3 live ones. 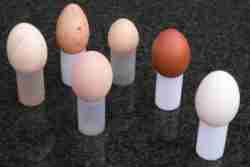 When my girls were small, we had hens and periodically a rooster, and every so often one of the birds would go broody and we'd shovel eggs under her for a couple of days and then wait 3 weeks. If possible we'd solicit our tree-hugging neighbours for spare eggs. With surprising synchrony, some of the eggs would hatch and we'd have a handful of cuties to marvel at. This omnium-gatherum source of brrod-stock meant that our hens were strikingly diverse in size and colour.  One day's egg inventory [R] indicates the accumulated genetic diversity. We'd spend some days providing sufficiently small food and watch the chicks following their "mother" around trying to eat what she scratched up. If the girls went rooting through the compost, they'd usually get a handful of small worms which were relished and I often lifted the bark from the woodpile and swept the revealed isopods and insects into a dustpan for chick protein. Of course, anything that had been on a dinner plate was scraped into a bowl for the chicks.

I shared that info.  Because of the free pizza gig, I'd made a slab of flapjacks, so I was also able to share a handful of oat&syrup crumbs and a whole biscuit for crushing. When I left work, the chicks were up and about, eating, and making a racket . . . so the prognosis is good.  The current hypothesis is that a truck, as it sped toward Rosslare harbour loaded with day-old chicks, had shed part of its load through a hole in one of the boxes, . I think, even if the three escapees don't make it, the idea of raising chucks has gained traction in one Co. Kildare home. More positive propaganda.
Posted by BobTheScientist at 06:46