Keeping dry while sleeping is one of the essentials for a comfortable life. Not for nothing is the idea of the earliest people cast up by the word caveman.  I guess that the accumulated carbon and carcinogens from poorly ventilated cooking fires helped to ensure an expectation of life at birth was less than 30. Plenty of thirdworlders don't reach 30 today because of this. But those early cave-dwellers got in plenty of nookie in the long winters, without devices to play with, and soon there were not enough caves to go round. Thereafter, the key thing was making roofs. Archaeologists talk a lot about stone axes and scrapers and picks made of antlers because these are the items that have survived.  They also mention postholes, often in circles, which delineate the size of their dwellings. But I've read very little about the antient archaeology of roofs. The larger the house the greater the engineering problems: even thatch is heavy and you need chunky timbers under the skin to support the weather-proofing.

Let's look at the top-layer.  I've mentioned how a small Scottish island was eaten away from the inside to satisfy an insatiable appetite for slates. Slate is a metamorphic rock that still retains the layers from its sedimentary origin. A skilled operator can split slates of any thickness and of substantial size. Thinner is better  than thicker because lighter so long as they are thick enough. If you look at a geological map on England, you will see an outcrop of Jurassic limestone comes close to the surface near the town of Stamford.  It is named for the village of Collyweston just outside of town. 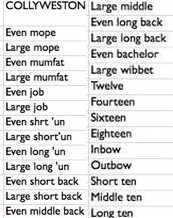 This sedimentary rock was found to split nicely into layers that were a good size for roofing. After hard winters the local builders found that the frost [water expands as it freezes; this is why icebergs float] did the work of splitting very nicely, thanks. With impatience and global warming, there are plans to create artificial freeze-thaw cycles.  As the surface outcrops were exhausted, they dug pits in the earth down below the collyweston strata and excavated the underlying sand until a 'log' of limestone fell down from the roof of the shaft [helpful diagram].  In temperate England the underground layers were never exposed to frost, so each log had to be brought to the surface during winter.  You might think it was a fool's task to hack away at the sand supporting tonnes of rock above your head, but the quarrymen would listen to the rock and shuffle back out as the shearing forces gave their characteristic cry before the fall. In the tale of Ye Ringstone of Knockroe, I told how those stone workers also relied on their ears. The collyweston protocols would cause any Health&Safety officer to have kittens and this elegant appropriate-technology method is rarely carried out now. Now, rather, they bring heavy machinery in to strip off the 'over-burden' to expose the Jurassic measures. With such an organic breakable material, it would be impossibly wasteful to only accept/use slates of a particular dimension, and so the tradition arose to employ a variety of sizes when laying out a roof.

The largest slates were employed at the bottom on the roof where they had to hang free over the eaves to shed water from the wall.  The slates got smaller course-by-course until the fragments  and awkward splittings could be used up right at the roof tree. This being vernacular architecture, the different sizes of slate acquired distinctive names like mope, mumfat and wibbet.  Don't think for a moment, as 'obvious', that the twelve is twelve inches long or that an eighteen is 50% bigger; that would be far too simple. In the late 19thC, for example, roofing slates were sold by the 'heap' or Thousand - enough to cover 200 sq.ft. - consisting of  7 'hundreds' each of 40 cases [=3 slates] plus 13 'big ones'  for the eaves. Thus a thousand = 840+13 and a hundred = 120. No wonder civilised nations moved on to the metric system and SI units.
Posted by BobTheScientist at 07:33