At school with The Bard?

At the end of November 2013, I confessed to beginning my very expensive education in a village called Titchfield between Portsmouth and Southampton in S England. Today it is Shaxper's birthday and I was rooting around looking for something interesting to say about England's poet-playwright in honour of the day. Poet he may have been but he was crap at spelinge. There is no record that he was born on the 23rd April, which is celebrated as St George's Day in England and elsewhere. Young Wm is, however, recorded as being baptised on the 26th April 1564, so if he wasn't actually born on the patron saint's day, saying so makes for a certain cohesion in the telling. 52 years later he died on the 23rd April 1616 exactly 400 years ago.

Apparently he went on a bender with Michael Drayton and Ben Johnson, literary friends and notorious topers, drank too much and 'died of a fever'.  On trifling evidence others have suggested a stroke finished him off. Others have noted that he sat up and wrote his will about a month earlier, and that his signature [R] is a little shaky; so maybe his fever had lasted longer. And there is no evidence that he died on the 23rd, but he was buried in Stratford on the 25th, so as at the other end of his life se non è vero è ben trovato. Shugspew is rightly respected for raising the hairs on the back of your neck: 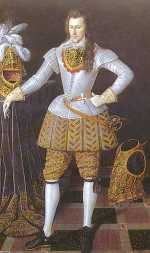 The thing about what passes for research in the Arts Block is that there is far less data (a handful of letters and documents in this case) and  you cannot do experiments with the written record.  Furthermore you can extrapolate as wild as you wish from mere hints, or very partial sifting of the material, to conjure up a story which might as much be fiction as anything in Shakspar. And of course, the Bard's tales must have derived partly from his own experience which laid threads in his mind from which to spin magic. Contrariwise, only a fool would insist that he must have been to the 'coast of Bohemia', Verona, Athens or Navarre. From very skimpy data and close reading of the text of one of Shogspore's plays, Love's Labours Lost, some scholars are suggesting that Wm spent a number of years in Titchfield as tutor to a young aristocrat and/or as a schoolmaster. The evidence extends from such tenuous logic as a girl being described both as black as ebony and a whitely wanton with a velvet brow Conundrum! How can a dark-skinned woman be described as ‘whitely’??? Because ‘Whitely’ is not a reference to Rosaline’s skin, but to ‘Whitely Lodge’ – a property owned by the Wriothesleys [Wm's sponsors and patrons] a mile or so away from Place House . . . in Titchfield. This must be true because it has been picked up by the BBC. What is more certain is that was Henry Wriothesley, the 3rd Earl of Southampton [L stryking a pose and shewing a legge] was probably Wm's pupil / companion when growing up. Many people believe that the  'onlie begetter of these insuing sonnets Mr W.H.,' is really HW the 3rd Earl and some further suggest that the same person is both the Fair Youth and the Dark Lady of the Sonnets. It looks like HW was, in the Byronic sense, mad bad and dangerous to know: he was a brawler, boozer and eclectic in his sexual preferences. The relationship between the two men depends on how much you want to accept homosexual innuendo / action or just put the language down to extravagant flattery and a difference nuance in the English of 400+ years ago. Like 'The love I dedicate to your lordship is without end ... What I have done is yours; what I have to do is yours; being part in all I have, devoted yours'.  You wouldn't get Brian Friel or Seamus Heaney talking like that to anyone.

When I was in school, we went to service every Sunday in St Peter's Church down in the village of Titchfield, where all the Southamptons are buried.  None of my teachers back in the 1960s made any suggestion of a little literary gayness in the village back in the day. It would have enlivened the English lessons.
Posted by BobTheScientist at 07:07