Nearly 40 years ago, with no lire left to spend on food for The Boy, then an infant, we were escaping from Italy across an Alpine pass at night. Three years ago, I told the romantic tale of how we landed a lucky and sustaining bowl of soup at the last outpost on the Italian side of the border.  It never occurred to us, being too hungry to think, to wonder whether we were mirroring the famous trek of Hannibal and his elephants as he marched to bring war to the Romans in 218 BCE. Πολύβιος Polybius, a historian who died 100 years later (although he interviewed some of the trek's survivors) said that the details of the route even then were lost to the mists of time.

First though, let's clear the elephant jokes out of the way:
Q. What's the difference between an elephant and a grape?
A. One's grey and the other is green.
Q. What did Hannibal say when he saw the elephants coming over the Alps?
A. Here come the grapes [he was colour-blind].
Eeee how we larfed when we were 8. 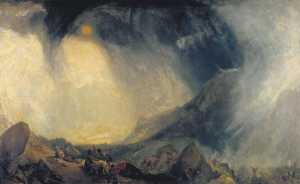 Molecular archaeology has turned up some new evidence supporting a Hannibal route across the Col de la Traversette.  This is now a rough bridle-path unpassable to motor vehicles about 20km N of where we got our Found Soup. Back  2234 years ago, Hannibal and his army had a cold coming of it, famously having to break through a recent rock-fall laying on top of an earlier rock-fall which was impassable for men and horses. let alone the elephants. They cracked the immovable rocks using fire and vinegar. JMW Turner captured their trials, with a liberal dose of pathetic fallacy, in his 1812 painting [L. Snow Storm: Hannibal And His Army Crossing The Alps]  Back in the 1950s Gavin de Beer, a well regarded embryologist, pointed out how the Col de la Traversette matched the ancient descriptions much better than alternative paths which modern engineers had used for laying down tarmacadam.

This idea was seized on by Bill Mahaney, a polymathic scientist for hire, and he went trekking along the pass until he'd convinced himself that he agreed with de Beer.  It's the rock-falls, stupid; none of the other options match Polybius's, and other early documenter's, descriptions of the terrain.  Most recently, elephant horse shit has made a huge splash towards elucidating the controversy [BBC]. Queen's University Belfast <huzzah!> has also made a contribution to the analysis. In an ancient bog near to the summit of the pass they have found a layer of churned up soil, such as might result if 15,000 horses had bivouacked in the place. In the sediment they have turned up a disproportionate number of Clostridial spores and even some fossilised horse tapeworm eggs. As you know from The Blob, Clostridium is a natural component of the intestinal flora of mammals. Nearby undisturbed soil had no such spike of Clostridium spp. The story has been covered by the unfailingly erudite Philip Ball [prev] in the Grauniad.
Posted by BobTheScientist at 06:45