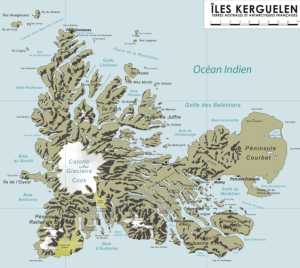 Kerguelen Island is a part of France, albeit situated 49oS, 70oE, as remote as you could wish in the Southern Ocean.  It's more or less directly opposite Saguenay, P.Quebec. Somehow, brutal as the Winter climate can be North of the St Lawrence Seaway, Kerguelen and the other islands of the Southern Ocean feel bone-chillingly exposed. It may be remote but Kerguelen is not small at 7,200sq.km it is almost the size of Co. Cork or Puerto Rico.  93% of the territory is the appropriately named Grande Terre, set in a halo of 300 smaller islands.

Darwin's pal Joseph Hooker stopped by here on his 1840 Ascension Island trip and, as an accomplished botanist, he described and named more than 100 different plants. He was particularly taken with the Kerguelen cabbage Pringlea antiscorbutica was first recorded by William Anderson Captain Cook's surgeon/naturalist in 1776.  As it says in the tin, it is rich in Vitamin C (and potassium) and so prevents the symptoms of scurvy among sailors who have been months at sea eating nothing but salt-horse and ship's biscuit (and weevils, if course). It is one of only a few brassicas that is self-fertile, an adaptation possibly driven by the whistling winds preventing pollination. As Leon van Eck noted, the food-faddist's kale Brassica oleracea is sooo yesterday, we'll soon see pretentious menus all over the world offering Kerguelen cabbage as the new digestive challenge.

Another species endemic to the islands of the Southern Ocean is the greater burnet Acaena magellanica which benefitted from selective predation by the European rabbit Oryctolagus cuniculus after they were introduced to Kerguelen in 1874 by sailors who hadn't a clue about ecology.  Even after the rabbits had been eliminated from some of the smaller islands, the predated plants failed to recover because the balance of power among the windswept low vegetation had been irrecoverably changed, notably by swathes of European dandelion Taraxacum officinale.

The cats of Kerguelen are a scourge to the native birdlife, but don't seem to be able to make much of a dent in the rabbit population which breed, well, like rabbits. The French government thinks the cats are distinctive enough or cute enough to feature in several postage stamps [example L]. The cats were deliberately introduced in 1950 as an antidote to the mice and rats which had been earlier introduced by accident.  You'd think people would have known better that late in the day.
Posted by BobTheScientist at 07:06