No not you, or me, we'll be eating mousse if we're lucky.  It's the wolves Canis lupus Canis lycaon [grrrr another familiar name, like, Alopex, has been dropped] who will be eating moose Alces alces tomorrow, if they can catch one.  It will have to be small or sick or very old or injured because the wolves I'm talking about are not very fit. We're on Isle Royale today because this week I'm island bound and I thought it would be nifty to extend the theme of population cycles of mammals: last week rodents, this week something bigger.  Isle Royale is a large [70 x 15km] island in the middle of Lake Superior, a little closer to Canada than to USA.  At 535 sq.km, it's bigger than several countries - Andorra, Liechtenstein, Monaco - so you'd think that would be room enough to support a stable population, but it's not. 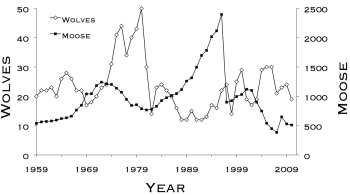 You can see [same data better graph in colour] that, in contrast to the near clockwork ebb and flow of lemmings and voles every 3-4 year, the population of both species has fluctuated quite wildly since records began in 1959. Indeed, the wolves are down to the last three descendants from a pair who crossed the winter ice in 1949.  All the subsequent wolves have been descended from that female although there was an injection of fresh semen [eeeuuw] in 1997 from a fit young male who crossed the ice that Winter. That wasn't enough, however, to really slow up the inbreeding depression that the wolves have been experiencing after so many generations of incestuous liaisons. The census bumbled along between 20 and 30 in number until that male died in 2006, but since then has been going steadily downwards.  Last reports claim 3 living wolves, so the end of the experiment is in sight.  In 1981, an imbecile brought his pet dog on a camping trip to the National Park, infected the wolves with parvovirus and killed half the population.

The outlook for the moose looks short-term rosy, long-term grim. Without predation the moose will go forth and multiply unchecked to increase their current numbers [N=1000] until they run out of food, which will mean a hammering for balsam fir Abies balsamea, which makes up the bulk of current moosey diet. The monster herbivores have already eaten all the more nutritious birch Betula spp. and aspen Populus spp. If the population gets near to its previous 1995 high of 2,500 animals, there will be insufficient food.  Last time, 80% of the moose died after a couple of years of very short commons.  As if death by starvation wasn't sufficiently awful, the warmer Summers will trigger a plague of Winter Ticks Dermacentor albipictus which can almost literally suck the moose dry. 10,000 ticks have been recorded on a single moose in a 'good' year each filling up with 1 ml of blood before dropping off to breed.  You do the math: I reckon that's 10 litres / 2 gallons of blood lost in a season. Even without the moose equivalent of tick-borne Lyme Disease that's a debilitating infestation, and they scratch themselves raw to get rid of the itch. 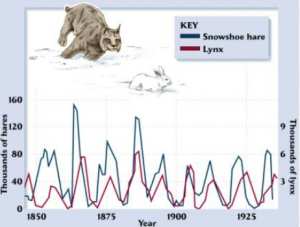 That's a great simplification of the population dynamics of a relative delimited ecosystem.  We haven't looked as the shrubby or annual vegetation, nor the busy bacterial community in the soil, or the other mammals which include beavers Castor canadensis [prev]; snowshoe hare Lepus americanus; red fox Vulpes vulpes [prev Australia]; red squirrels Tamiasciurus hudsonicus [prev Ireland] or ravens Corvus corax. Did I mention L. americanus?, the records from the Hudson Bay Company's fur trade, show [R] that it was in a stable 9-10 year up/down cycle with its main predator Lynx canadensis. So its not only small rodents that do this.  It's probably significant that the cycle is longer for the larger animals. The key difference between Isle Royale and lynx/hare is that the latter had the whole of the Yukon and Northwest Territories to play in; compared to which Isle Royale is a zoo with the animals psychotically pacing up and down waiting for feeding time. The likelihood that wolves will go extinct on Isle Royale because their numbers are so low that a bad winter, or a bad virus will finish the last few off is a salutary lesson if we aspire to maintain other ecosystems.  You don't have to chop down the last tree on Borneo to destroy many species; you just need to reduce the space to something less than top carnivores need to maintain a sustainable population.

Posted by BobTheScientist at 06:36