My first mentor was my high-school biology teacher, who had a fund of funny, and some downright peculiar, stories to help us remember the facts and relationships in life science. It was years before powerpoint, so the teaching was telling.  Once he read out, county by county, from a 19thC Flora the long list of common names for dandelion Taraxacum officinale. I was entranced. For a European perspective on the issue. For hot dandelion wine.  Another story was about a medieval remedy for a particular sort of mushroom poisoning.  This involved mashing up three rabbit Oryctolagus cuniculus livers, two rabbit brains and some other ingredients and chugging down the brew while it was still warm. Mr Wilkinson pointed out that, although this worked, modern science had revealed that the only active ingredient was the rabbit liver which housed an enzyme that specifically detoxified that species of mushroom. That allowed rabbits to get calories when other foods were scarce.  Those medieval healers hadn't read Claude Shannon's recipe for creativity, so that they never simplified the recipe to its bare essentials and so made application a bit quicker. 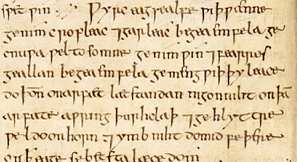 A couple of days ago I was browsing researchblogging and found a piece by Rosin Cerate, which brought the redundant rabbit brain story into focus. It's a wonderful collision between the Arts and Science starting with a close reading of Bald's Leechbook by Freya Harrison, Stephen Diggle et al. at Nottingham U. Bald's pharmacopoeia was written in proto-English 1000 years ago and describes infections that we recognise today from the symptoms to be caused by Staphylococcus aureus. The methicillin-resistant variety of this bacteria MRSA is what frightens old ladies going to hospital for hip-replacement surgery and kills several every year. Old Bald didn't know anything about microbes but he recorded a recipe [L] for an eye-salve that worked. Harrison and Diggle provide a gloss for the words shown in the picture “Ƿyrc eaȝsealf ƿiþ ƿænne: ȝenim cropleac ⁊ ȝarleac beȝea emfela . . ." "Make an eyesalve against a wen: take equal amounts of cropleac and garlic, pound well together . . .". This had a certain resonance for me because I was beset with Staph infections when I was a child: boils, styes, carbuncles almost every week: all painful and full of pus.  The recipe combines two species in the genus Allium 'cropleac' and garlic crushed in wine and oxgall and left to steep for 9 days in brass vessel. After this the poultice can be applied to the infected eye with the tip of a feather. 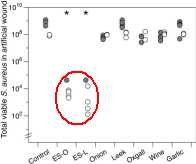 These are not unreasonable things to put into an anti-bacterial concoction, garlic is known to produce anti-microbial chemicals; brass has been long known to be anti-microbial, probably because brass is 2/3 copper [and 1/3 zinc] and the wine will soon turn acid and that will help dissolve the metals into the stew.  The lads from Nottingham have reconstructed the 10th century recipe going to some pains to be todo authentico: 1) using an organic English wine 2) Sigma-Aldrich "bovine bile salts" 3) garlic Allium sativum mixed 4) with either onion Allium cepa ES-O or leek Allium ampeloprasum ES-L to stand in for the cropleac .  What's really interesting is that all these ingredients on their own are not significantly different from the control [L] but that the two full-monty treatments ES-O and ES-L bring down the concentration of S. aureus about a million-fold [L lower values circled in red].  Old Bald and his school knew a thing or two about what worked and what didn't and seem to have developed a recipe that that was sufficiently complex but not too complex. It is the flip-side of Einstein's restatement of Occam's Razor "A scientific theory should be as simple as possible, but no simpler." This whole story is just marvellous: simple, thoughtful, cross-disciplinary and clearly a lot of fun.  If all science was like this, there would be less completely useless unreadable and unread uncited papers to clutter the library bookshelves.
Posted by BobTheScientist at 07:12