After he died leading a charge at the Battle of Lützen, the Swedish Riksdag officially named their former king Gustav Adolf den store and he is widely tribbed outside Sweden as "the Great". The fatal/final battle was fought in Saxony on 6th November 1632 and the death of the king didn't much slow up the impact of the Swedes on the Thirty Years War, which rumbled on with sack and pillage until the Peace of Westphalia in 1648. It is superficially a war about religion in Northern Europe but, at least for Sweden, it was also about politics, territory and trade.  Not since the vikings 700 years before had so much sturm-und-drang come out of the North.  That's all a long time ago, but in Sweden, Finland and Estonia, which were all part of the Swedish hegemony at the time, the day of the Great King's death is remembered . . . 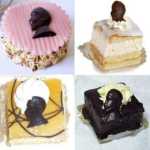 . . . in pastry.  During the week that's in it, pastry-shops in those countries do a roaring trade in Gustaf Adolfs-bakelse but there is no agreement about what goes in or what the confection should look like [see R for some options].  The one thing they have in common is a chocolate (occasionally marzipan) head of Gustav Adolf stuck on the top. Here's what goes into one variety. As a reader of English you shouldn't have enormous difficulty making sense of another Germanic language . . . if you've ever done any baking yourself.  It may help to sound out the words.  It's a bit like reading the 1000 year old recipe for eye-salve I put up earlier today.
The bottom:
3 ägg; 1,5 dl socker; 3/4 dl vetemjöl; 3/4 dl potatismjöl; 1,5 tsk bakpulver
The elderberry cream / Fläderkräm:
60 gr osaltat smält smör; 1 ägg [blimey another ägg!]; 50 gr socker [and more socker: this is not looking healthy]; 5 gr vetemjöl; 1 dl outspädd flädersaft; 1 dl vispad grädde
The blackberry cream / Svartvinbärskräm:
75 gr kesella; 1/4 dl crème fraiche; 1/4 dl socker; cirka 1 dl svartvinbärsmarmelad; 1 blad gelatin; 1 dl vispad grädde
The blood-red topping:
1 dl passerade hallon; 1 msk florsocker; 1/2 ark gelatin, blötlagt och smält.
Now if your life depended on it, you could cobble something edible together from that information - esp if you had a source of chocolate king's heads.  But most of us would be totally at sea if we only had Finnish to inform us . . .of maybe not.
4 suurta munaa [eggs, beaten]
1 ½ dl sokeria [sugar!]
reilu 1 dl vehnäjauhoja [turns out that jauhoja is the same as mjöl]
3 rkl kaakaojauhetta [cocoajauhetta]
1 tl leivinjauhetta [another sort of jauhetta
½ dl perunajauhoja
vaniljaa [vanilla].
The rest of us are going to have to celebrate the death of the Champion of Protestantism in some other [local] way.  Not so nice if you're condemned to live in Ireland or Portugal where the pastries are 'robust'.  Exactly a month from today we should all be glomming down boterletter van Nederland.

Posted by BobTheScientist at 13:30