A few days ago, I was talking about John Cleese and his attempts to get to grips with the act of creation through reading the key sources and relating those findings to his own experience. I've also alluded to the sources of inspiration experienced by mathematicians such as Cedric Villani. On a personal note, in a life time of science, I've had three good ideas, one of which probably turned out to be wrong. I've had a few more Aha! moments, to be sure: it would have required enormous patience and dedication to carry on at the coal-face getting positive feedback only once a decade.  I've suggested that one way to get an idea is to have half an idea and then lob it across the table at some colleagues. Famously, when Sydney Brenner and Francis Crick shared an office in the MRC for 20 years, they had a rule that either could say aloud whatever came into his head.  If you've got no friends, then I've found that cycling to work has delivered, not only mighty thighs, but also a good number of insights and solutions to problems. The exercise increases the circulation to the brain (and everywhere else); to survive a decade of city cycling you have to be alert; that extra brain activity can unconsciously be channelled into problem-solving.  That's handier than Poincaré's solution to having ideas which asks you keep stepping onto buses preferably in Normandy. 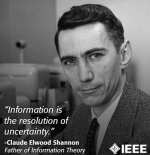 Now here's a novelty: we live on - are the only inhabited house on - Shannon's Lane in the Blackstairs Mountains hills.  It's named for the family that used to live in our farmsteading. The most famous member of the Shannon clan is surely Claude Shannon the mathematician and engineer. He became the Father of Information Theory FIT by applying Boolean logic to circuit-boards while working in Bell Labs. We'd probably have got to universal mobile phone usage and rockets to alpha-Centauri without him but it would have taken longer.  During WWII, he met Alan Turing and had a conversation in which half ideas were lobbed back and forth across a canteen table. Part of me wishes I'd been a fly on the ketchup bottle taking notes, but the other half knows I'd have been unable to follow the Smart Guys as they romped through ciphers and circuits way above my head. It turns out that a re-found friend of mine is also interested in the trappings of creativity. His father wrote A History of Engineering and Science in the Bell System, so knew a thing or two about The Shannon. As well as being a whizz at information theory, code-breaking, robotics, juggling, unicycling and chess, Shannon had thoughts about where the ideas came from. His piece on Creative Thinking, written in March 1952, is pages 529-538 of Claude Elwood Shannon Miscellaneous Writings edited by N.J.A. Sloane and Aaron D. Wyner which is available as a mammoth PDF (half Gbyte!). I've filleted out the relevant pages as a separate, much smaller, PDF.

Here's the executive summary of what Shannon, a true creative genius, had to say on the matter of thinking creatively.  Back in our Geordie days in the 1980s, there was a radical Scottish theatre group called the 7:84 Company; named for the observation that 7% of the people owned 84% of the wealth.  Shannon believes this to be true of creative people: most of the useful ideas come from a tiny subset of the whole population.  The same power law applies to word use in any language and to publishing where Harry Potter sold as many copies as the whole rest of 20thC fiction.  He believed that three attributes needed to be present in a truly creative mind.
He then goes on to elaborate on attributes, some of them possibly trainable or learnable, that increase the hit-rate; perhaps particularly through early experience when we are little more limber in the brain.
Shannon then lists his toolbox, the tricks of his trade that had helped him find solutions to the most intractable of problems.
Good luck, I hope you have good more ideas than me.

Posted by BobTheScientist at 06:07