I suppose if I'd been pushed to it, or been in a grudge Pub Quiz, I could have worked out with which country Rapa Nui / Easter Island was affiliated but I was caught on the hop to hear some E-islanders speaking Spanish the other day. If Chile's political reach can extend so far out into the trackless ocean, I assume that everything between Rapa Nui and Valparaiso flies the same flag [R] and it does. I knew [expensive education and all] that Alexander Selkirk was marooned on an island off the West coast of S South America in the 1700s and that his tale was the inspiration for Daniel Defoe's [DD previously] Robinson Crusoe. But I was wildly wrong on the distance details because  the Juan Fernández Archipelago is 670km from the mainland!  Even 'archipelago' is a bit of an ask because, as it says on the tin in eSpanish, Más a Tierra is 180km nearer to the continent than Más Afuera. Today 22 Nov is the 441st anniversary of the discovery 1574 of the island groups by - Juan Fernández - who was sailing South so far from the coast in order to avoid the North-setting Humboldt Current.  This is one of the few examples of a Pacific island first discovered by Europeans.

There are thus two tiny specks of land distant from each other and really remote from anywhere else. 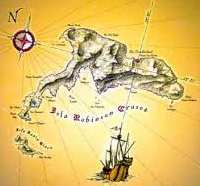 Actually, as you see on ye antient mappe of Más a Tierra [L]  there are three islands if you include (and you should) the truly diminutive Santa Clara to the South-West.  Santa Clara is only 2sq.km in size and has no permanent human inhabitants, probably because rainfall is sparse and dependent on El Niño. There are a great many feral rabbits Oryctolagus cuniculus and goats Capra hircus both introduced by sailors and both doing serious damage to the native flora.

In 1966, the Chilean government came up with a cunning plan to boost tourism in the remote archipelago.  Did they see all the tour boats visiting the Galapagos far farther North, boosting the economy of Equador?  By presidential decree they renamed Más a Tierra as Isla Robinson Crusoe and Más Afuera as Isla Alejendro Selkirk. At just under 50sq.km they are about the same size but 95% of the 900 inhabitants live on Crusoe most of them in the village of San Juan Bautista.  The tourist trap plan has been modestly successful with a few hundred extranjeros visiting each year, many of them to explore the wreck of SMS Dresden which was scuttled just off-shore to avoid sinking or capture by the British in March 1915.  It's really rather outrageous to sweep up both the real and the fictional castaways in the renaming scheme, because Defoe is quite explicit that his hero is shipwrecked off the North coast of South America near the mouth of the Orinoco River.

As a child, I loved The Life and Strange Surprizing Adventures of Robinson Crusoe, Of York, Mariner for much the same reason as I enjoyed The Day of the Triffids: they both serve as a training manual for  post-Apocalyptic survival. Crusoe's ship is wrecked and the life-boat is wrecked and he alone is washed up on a sandy shore. A while later, the storm having abated, he sees that the ship is a short way off-shore on a reef. Over a number of trips to and fro on a raft, he liberates the materiel to survive for an extended period. The ship's carpenter's tools and bags of nails, sail-cloth, a musket or three with power-kegs and shot, rum, hatchets and lengths of rope. Here: read it yourself, it's mighty.  Whenever I can, after a storm has passed through Ireland, I go down to the sea and hope for something more exciting than buoys, of which I now have a great store.  They'll be handy after Armageddon.

Posted by BobTheScientist at 05:56