In the certainties of the limited world of Trivial Pursuit and pub quizzes there is one answer to any question. The QM's decision is final; because s/he got it out of the back of the Compendium of Table Quiz Questions and it must be true.  It is bad form to argue at pub quizzes, it's meant to be fun as well as isn't-Bob-clever. and the money is going to a good cause.  But questions with only one answer aren't very interesting and that's why QI, the thinking-person's game-show is in its 13th season. Although, if you see that clip you'll wonder that any of the QIstas have survived. An earlier stodgier version of the concept was a BBC production called The Brains Trust that ran through the 1940s and 50s on wireless and TV and Pathé News; there you could use a word like self-abnegation without blushing. One of the egg-heads was C.E.M Joad, who started many of his answers with "It depends what you mean by . . .".  B'god that's a welcome introduction to almost anything that's worth investigating. 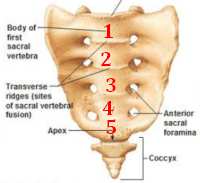 At The Institute we have up-graded the Counting Dem Bones practical from a stop gap to a written-in-the-manual item for all 1st Year cell biologists.  We've also found Bob the Skeleton in a dusty cupboard and have that as a resource for the exercise. Most of the ribs on Bob's left side have been replaced with PVC tubing and he is festooned with gobs of ancient glue and crumbly sellotape which have long since ceased to hold him together. It was good fun, getting the folks to think a little and realise that it's quite hard to find where the '206' comes from or is comprised of. One of the key realisations was that, in 206-land, the sacrum and coccyx at the base of the spine are considered 2 bones not the 5 and 4 bones which a cursory examination [L above]reveals them to be. There is indeed a good bit of inter-personal variability here as to the amount of bone fusion and even as to how many bits are present.

Contrast this with the skull which is treated as 22 bones out of 206 rather than two that Josie Public sees with her own two eyes: skull & jaw-bone. N=22 does not include the 3 teeny bones in each ear-hole: the stirrup stapes, [R at something approaching life size] hammer malleus and anvil incus, and N=206 does not include these ossicles either.

If you're interested in your bones - and who isn't? - you should concentrate half your attention on the limbs because they comprise half of the bones: mostly in the hands and feet. Interestingly the front and back limbs have the same number of bones but in different places. Legs have a patella halfway up but there is no equivalent at the elbow joint. OTOH, the ankle has one fewer bone (tarsals=7) than the wrist (carpals=8) [R above]. Otherwise the structure of each limb is uncannily similar: down to the 3 phalanges in the little toe, the smallest of which could easily get lost if you dropped it in the rice.  And the great toe and thumb both have only two phalanges.

I was reading up on the wrist bones and the pisiform (pea-like) was referred to as a sesamoid bone. These are peculiar bones, named after sesame seeds, which develop entirely or partly enclosed in tendon. The patella is the largest of this class of bone and nobody from 206-ville considers excluding either patella or pisiform.  But sesamoid bones are 'commonly' found at the toe-end of the metatarsals [L above as x-ray ghosts] and also at the base of the thumb. I say commonly, because the appearance and number of sesamoids is higher variable between people. Other examples of human osteo-polymorphism in my earlier piece. Why aren't they included in the 206? They are a lot bigger than the ear-bones.  Indeed, there should be N=4 ear-bones as the lenticular process of the incus is a teeny-tiny sesamoid bone with a separate developmental origin. Sesamoid bones got a brief pulse of press in 1980 when an extension of the radial sesamoid got tribbed in Stephen J. Gould's [previously] famous essay The Panda's Thumb and the book of the same name.
The count of bones is thus arbitrary and capricious and very bad science until you get under the covers with Bob the Skeleton. When the Quiz-master asserts that N=206 you are well within your rights to cry "It depends what you mean by . . .".
Posted by BobTheScientist at 07:09