In the early 1980s just after Luis and Walter Alvarez had made their extraordinary claims about the events which terminated the dinosaurs, two smart and incredibly hard working biologists came together in collaboration at U Chicago. David Raup [who died this year: obit] and Jack Sepkoski shook up the field of palaeontology by leveraging their skills to analyse a lot of data rather than going out to find more fossils at ever more remote transitions in the geological strata. We need field scientists like Neil Shubin, for sure, without their primary original observations and interpretations there would be no data. But we also need broad-brush people to put the details into their evolutionary context. Looking through the data Raup became convinced that there was a logical disconnect between a) the dogma that every species has been honed and polished by millions of years of evolution to be uniquely well adapted to its ecological niche and b) that same near-perfect specimen being hustled abruptly off the stage of life to the oblivion of extinction.

Raup started talking to his colleague Jack Sepkoski because Jack had the data, all of it, in his head.  If Neil Shubin is the hard chaw of palaeontology with his field work in the remote arctic subsisting on iron rations and working like the devil between incoming storms; then Sepkoski was the hard chair of palaeontology, spending his waking hours in the library reading the literature and taking notes. At least for ancient marine fauna, Sepkoski knew when and where every species lived that has ever been described. He was following one of Claude Shannon's precepts for the creative break-through: know your field. His first major contribution was to sort the bewildering detail of 600 million years of fossils into three great sequential themes - in development, architecture and ecological complexity - that dominated the living world one after the other: the Cambrian Fauna - dominated by trilobites - giving way to the Palaeozoic fauna - rich in brachiopods - which in turn yielded to the 'modern', mollusc-ocentric fauna.  I say 'modern' because their rise to the top started 230 my ago.

Since Jurassic Park we know that the fossil record is divided into convenient lumps which can be found piled up one on top of the other in the same order wherever in the world the layers are exposed. This principle of stratigraphy was one of the evidential corner-stones of Darwin's explanation of the Origin of Species.  The order of play of Periods follows the mnemonic
the last two, which are richer because more recent, are further subdivided into Epochs
Notes: some geologists, especially US, divide Carboniferous into two chunks Mississippian and Pennsylvanian. Since I was in school, they have split Tertiary into Palaeogene and Neogene. 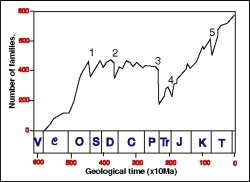 For a long time, I didn't appreciate is that these geological Periods and Epochs are not just convenient bins for the filing of fossils but that they represent major shifts in the faunal assemblages from what appears in the fossil record before or since. Sepkoski's uber-groupings suggested that some of the transitions were greater than others.  The picture on the Left taken from U. Bristol "after Jack Sepkoski" shows that the Great Dying is not #5 the dinosaur-dumping end-Cretaceous extinction but #3 at the boundary between the Permian and Triassic which created the conditions /cleared space for those same dinosaurs to start their 100my dominance of the terrestrial fauna.
In 1976 Raup calculated that 96% of marine species died [exec summary] in that event 250mya. The calculation hinges on an interesting statistical tool called rarefaction analysis. His overview analyses of species distribution deliberately stepped away from counting species and concentrated on higher taxonomic classifications; documenting whether whole families or orders of animals had gone extinct. All it takes for a species like the Tasmanian Wolf Thylacinus cynocephalus to go extinct is for a gunned up farmer called Wilf Batty to avenge the loss of his chickens. That's a random event, an anecdote, not a pattern or data. Loss of some orders is going to reduce the number of species more than the loss of other orders. Extinction of Order Chiroptera in mammals, for example, would mean the end of 800 separate species while Order Tubulidentata only has a single member - the aardvark Orycteropus afer. But the most important contribution R&S made to our ways of thinking about the pattern and process of evolution was to push the idea that mass extinctions are random, external, unfair events that had nothing to do with how well adapted those species had been . . . and then assert that the external events were not random. If you take the inverse of the previous graph [L above] and plot % extinctions against time, you can a) identify the peaks which we call mass extinctions and b) note that there seems to a periodicity about the data.  Biological data is noisy: we're not sure of the dates; the fossil record is patchy; most species, because entirely soft-bodied, don't fossilise at all; most terrestrial environments leave no fossils; we have barely even started on the fossil record of South America; while for Africa we've just skimmed the surface looking for hominids. Raup and Sepkoski's 1984 PNAS paper is available in its classical entirety. I like that paper very much, Sepkoski had the data, Raup was happy with time-series analysis, their complementary skills and the to-and-fro of half formed ideas gave the rest of us something to really think about. People were not slow to add the increasing certainty that the Cretaceous-ending event was due to an asteroid collision to the regular return of Halley's Comet to suggest that every 26 million years the Earth was likely to have a close encounter with something large enough to knock your socks off.

One of the more coherent theories to account for the periodicity is Nemesis a companion start to our Sun, which regularly comes close enough to whack some lumps out of the Oort cloud at the further reaches of the Solar System.  Some of these fly towards us and sometimes they miss, so there may be gaps in the 26my cycle. Nemesisologists believe that the most likely candidate is a red dwarf star of which there are 3000 near enough to make a difference. But before we invest a lot of money/time in seeking the cause of the periodic events we need to be really skeptical about whether the periodicity is real or an artifact of time-series analysis which can all too easily find a pattern if there is no prior constraint on the time between peaks. I've been caught by such a wishful thinking trap.

The good news is that the last such event was 11 million years ago, so its not going to impact on the next soccer World Cup.


Posted by BobTheScientist at 05:26