If you wind me up, I will go on and on and on about modern medicine and unnecessary, expensive and invasive therapies wrought on the elderly in a vain attempt to make them live forever. In the US, 25% of your lifetime medical expenses are incurred in your last year of life when it should be 1/80th. The implication is that drugs and surgery don't really work to extend life if you are on your terminal illness. The likelihood that this illness is the terminal one, and so shouldn't really be treated, increases [exponentially?] as we get older. In my book, if there is a bottleneck in Intensive Care, then we should privilege young wage-earners with dependents: if they can be pulled through it will have beneficial utilitarian consequences. Me, I'm genetically dead, my kids have left home, and I've nothing new to say, so I should find me a nice ice-flow to die on rather than blocking some young chap's ICU bed. But some medical devices are so damned elegant, you have to tip hats to the engineers and doctors who thought them up and then designed them.

It is a peculiarity of evolution that we re-use and re-purpose bits and bobs which exist for one function, so that they are used for something else.  There are two useful sets of plumbing which serve a number of purposes.  The first is the urino-genital tract which is a long old tube that leaks urine from the bladder and also takes cocktail of ingredients (stirred not shaken) of semen from the testes+seminal vesicles+prostate+Cowper's glands and delivers that to the outside as required. Silly to have two parallel pipes. Another example of this is the common duct that connects two tubes, the bile-duct from the gall-bladder and one from the pancreas, which allows these two digestive glands to dump their product at the very top of the small intestine.  If you have a blockage in this common bile-duct you feel crook and your skin turns yellow because the pigmented bile is not leaking away into the gut. 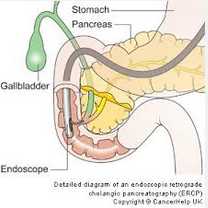 You can get jaundiced from a whole rake of different mis-functions: it could be liver cancer, or hepatitis from viruses or bacteria, or gall-stones or pancreatic cancer. You'd like to know which of these is the case before you implement a curing regime.  Viral hepatitis from, say, HCV needs interferon-alpha to control the concentration and replication of viruses. Gall-stones need to be removed, and the medical device of choice for doing this is Endoscopic retrograde cholangiopancreatography or ERCP [see L].  This a flexible steel and plastic tube that you can push down the throat, through the stomach, out through the pyloric sphincter and have a look at the end of the common duct.  The ERCP has a teeny-tiny camera for determining what treatment is appropriate and an on-board tool-kit for doing what's necessary. It's moderately invasive and usually isn't used for purely investigative work - a lot can be worked out with a CAT scan or even an old-fashioned X-ray.  The pyloric sphincter is a little ring of smooth muscle that keeps your dinner in the stomach until it is ready for the intestine.  There is another even tinier ring of muscle at the neck of the common duct called the sphincter of Oddi.  That sphincter will effectively prevent a gall-stone from passing into the duodenum, and can be trimmed back with a hot wire from end of the ERCP, so that the stone can be shed.  A little cut from the inside and the problem is solved.  Not sure if and how effectively Oddi's sphincter repairs itself afterwards but clearly its better to clear the obstruction and risk a little leakiness afterwards.  If you're 90+, then there may not much afterwards to worry about and at least you won't die the colour of a sou'wester.
Posted by BobTheScientist at 06:31