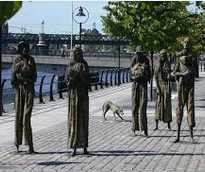 Unknown Festivals Department. Today in Ireland and wherever the diaspora has a cousin of Michael Blanch is Lá Cuimhneacháin Náisiúnta an Ghorta Mhóir or National Famine Commemoration Day.  This is a ragged-arsed grudging sort of event that hasn't yet taken off. Michael Blanch, a nice chap from Tallaght, has spent much of this century barracking anyone who will listen to institutionalise the remembrance of the Great Hunger of 1845-1847.  You may hear more about it today if you live in Strokestown, Co Roscommon because that is the 2015 designated venue.  Chekkitout on Wikipedia to see the gradual collapse of government resistance to the idea or the CCIFV friendface page for pictures of Mr Blanch, the primum mobile, and his family.  This CCIFV is not to be confused with the Google-more-important [GMI] Chambre de commerce et d'industrie française au Vietnam. Currently the commemorations seems to centre on making a raree show or a pantomime of the tragedy by dressing up as mid-19thC peasants and walking to the haunting, Giacometti inspired, famine sculpture [R above] on the Liffey Quays in central Dublin. We all might get more into the spirit of those savage times by eating nothing but lumper potatoes for a month and then nothing at all for a week.  It would do something positive towards the obesity epidemic that is our current scourge.

I've gone on and on before about cheap food.  The assumption behind this is that, while in some cases, you get what you pay for, there is a also a helluva lot of mark-up in the price. You pay for a lot of unnecessary packaging, transport and advertising not all of which is really adding value to the food. Only 1 wine-lover in 10 could reliably recognise their favorite expensive tipple if it was presented in an unlabelled decanter.  Some yellow-pack products are every bit as good as their branded equivalent because they are the same thing packaged differently and sold cheaper because Aldidl has contracted to take 10,000 tons of the stuff under their own label.  You have to a) use judgement but b) more importantly use blind tasting experimentation to decide where you can shave $$$s off the weekly grocery bill and not compromise on quality.  I often cite a statistic I picked up when I was in Graduate School in Boston. In 1982 you could live for a year on $150 if you could tolerate a diet of soya-beans and lard with a little liver and a little orange juice. That's $12.50 pcm back then. Since, we've had inflation but also some falling off of the price of food and the debate over on Quora is whether you can live for a month in the USA allocating only $10 for food.

The comment by Meghashyam Chirravoori suggests that a rather interesting vegan diet [potatoes Rs. 15/kg; Bottle gourd or onions Rs. 25/kg; Tomatoes Rs. 30/kg; sugar, rice, aubergine, spinach or okra Rs. 40/kg; sunflower oil Rs. 90/kg; Lentils Rs. 110/kg; 12 Bananas Rs 50] can be had for about US$18/mo. So it's not really cheaper to survive in the third world.  The main difference, given the number of people living on less than $2/day is the proportion of their income that goes on food. My reflections suggested that the Celtic Tiger youth of Ireland would think nothing of dropping €4 on a single lunch.  Eee when I were a teenager, I worked a 40 hour week bagging potatoes in a freezing barn for £6.50  . . . and we lived in a cardboard box in middle of t'road. 4 Yorkshiremen I - II.
Posted by BobTheScientist at 07:22