Back in the depths of winter, I had a bit of an island binge and said something about the Îles-de-la-Madeleine / Magdalen Islands which are stuck out in the middle of the Gulf of Saint Lawrence as hazard to shipping  One part of the archipelago is called Grosse-Île which is so unromantic that the Anglophones are ashamed to call it Big Island, but use the French term as well.  It's a little confusing because there is another Grosse-Île in the St Lawrence further up-river nearer to Québec. Pedantically there is also a Grosse-Ile (no accent) in Michigan, and Grosse Isles in Louisiana and Manitoba. But today we treat of the other Grosse-Île Québecois. It is part of the strung out, low-slung archipelago of Isles-aux-Grues named for the cranes Grus canadensis that were abundant when European explorers first cruised past. Isles-aux-Grues itself is the only permanently inhabited [N=140ish] island among the 21 specks and wisps of mud-flat and salt-marsh that make up the archipelago. The kids go to school every day by Cessna - how cool is that? Saint-Antoine-de-l'Isle-aux-Grues, the parish, is now famous (presumably a relative term, because I'd reckon that 95% of the people who are reading this have never heard of the place, let alone its manifold delights) for bird-watching [it's the cranes], goose-hunting [potatoes roasted in goose-fat, mmm, so good] and cheese-making [any cheese is good with me and I'm sure that I-aux-G cheese is Woebegon above average].

In the past, Grosse-Île was enormously well known as Canada's Ellis Island, serving as a quarantine station, immigrant reception depot and, sadly, grave to thousands of Europeans who had crossed the Atlantic in a coffin ship. It was opened in 1832 and closed in 1937 a little over 100 years later and processed about 4 million people. Over that century only 14% of the immigrants hailed from Ireland, but in the early years they contributed a much higher proportion: 60% from 1830-1850. The data I have is for arrivals to the Port of Quebec but the vast majority of the arrivals were stopped for processing at Grosse-Île. That sounds like a leisurely 100/day but of course they didn't arrive with the ticking of a metronome, but in floods that would overwhelm the facilities and then die down, indeed die off, a lot of them. In the days of sail, with the wind being sporadic, a fleet of ships would arrive within a couple of tides of each other and have to anchor off shore until the authorities could process them. 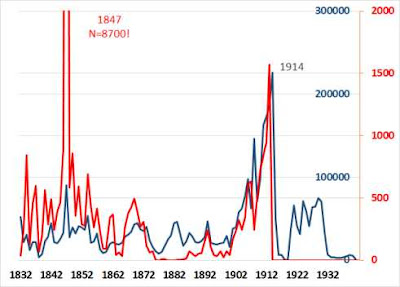 The data for arrivals, hospitalizations and deaths can be seen as long columns of figures. But they also hint at tragic stories.  I could display these data better, indeed a child of six could do better but they summarise the number of arrivals in the Port of Quebec as well as the number of admissions to hospital; but on very different scales.  Arrivals varied from a a couple of hundred to a couple of hundred-thousand in a particular year, while the numbers admitted to hospital varied between 0 and 1500 except in the tragic year on 1847 when there was an off-the-page spike of desperately poor immigrants from Ireland in the midst of the great potato blight [caused by the fungus Phytophthera infestans] famine.

Not a few arrived, especially in 1847-1848, with ship-fever raging on board and much of the human freight went direct from ship to the graveyard without getting processed through the hospital. Ship fever aka camp fever, jail fever or Epidemic louse-borne typhus is caused by Rickettsia prowazekii, which is carried from person to person by lice Pediculus humanus. We've met Rickettsia before as a close relative of the ancestor of mitochondria it is an alpha-proteobacteria, quite closely related to  Rhizobium spp. which fix nitrogen in the roots of peas and beans. In 1834 and again in 1854, the killer was cholera [Vibrio cholerae a gamma-proteobacteria] which scythed though the berths down in steerage. And in other years it was just death which killed people.

The data show a rise and rise of arrivals in the first decade of the 20thC, peaking at 225,000 in 1914.  WWI gave everyone other things to worry about and army-recruiting gave poor men an option other than leaving their country for the New World. They were not to know it was a Faustian bargain as so many of them left their country for the Other World. Crossing the Atlantic in war-time posed additional hazards as well. Immigration accordingly dried up reaching its nadir in 1918 when only 77 people arrived at Grosse-Île and of these 42 got a permanent billet ashore in the graveyard.  The striking thing is that after 1914 there were no more hospital admissions, although there were still sporadic deaths presumably aboard ship. That is due largely to the enormous strides made by microbiologists and sanitation experts in the years since Florence Nightingale gathered her statistics of death in Crimea.

You can search for your rellies. Or visit the Irish Memorial National Historic Site, where it looks like there is a long glass wall with names etched thereupon.
Posted by BobTheScientist at 06:55