I was really taken with this picture of Mt Cleveland having a quiet smoke. It is exceedingly remote - about halfway along the chain of the Aleutian Islands which extend in a swooping arc for nearly 2,000km from the Seward Peninsula of Alaska. There are more than 100 separate islands in the chain which together make an area of 17,500sq.km of 'dry' land about half the size of Belgium but with a human populations of only 8,000. We had a brief foray through the trash on Kiska in January.  Kiska is part of the Aleutians too but 870km further West - that's about the distance between Bruxelles and Firenze. There's plenty of space in and off Alaska. 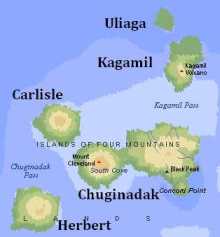 Mt Cleveland is one of four quintessential conical volcanoes [striking picture] which give the name Четырехсопочные Острова The Islands of Four Mountains to the group of 8 islands with a mix of local and political names: Amukta, Chagulak, Yunaska, Herbert, Carlisle, Chuginadak, Uliaga, and Kagamil.  For scale Carlisle and Herbert are about 7km across. Mt Cleveland has been quite active in the last 5 years: blowing its top 3 times in 2009, twice in 2010 and again in 2011 and most recently in Nov 2014.  Maybe that's all for now folks, but remember Eyjafjallajökull in 2010? My girls were caught in Switzerland by that close-down of European air-travel and had to overland themselves home. Even having a quiet smoke has potential to disrupt air travel but an eruption by any of these volcanoes would spew so much static dust into the air that planes would have to be expensively re-routed. But nobody lives in the Aleutians you cry.  Turns out that the great circle shortest path route from San Francisco 37.7oN to Tokyo 35.7oN flies right over Chuginadak 52.8oN.
The archipelago is currently under scientific investigation studying who and how made a living out of this inhospitable region.Wet as they are, getting access to fresh water is often a significant logistical problem: it rains . . . there are roaring floods . . . there is nothing left.  I think I'll put the Aran Islands higher up on my list of archipelagos to visit: easier of access.
Posted by BobTheScientist at 07:00