Wrong turn for the dragon

For a while, I've been wanting to write about Don Knuth who wrote TAOCP The Art of Computer Programming which is for computer geeks what ZAMM Zen and the Art of Motorcycle Maintenance is for philosophy geeks. TAOCP was conceived in 1962 as a finite book of 12 chapters and spawned into an infinite book that yielded volume 4A in 2011 having released Volume 1 in 1968.  Knuth is now 77 and doesn't seem to be stopping anytime soon.  He's an interesting version of nerd:
years ago he offered some advice about life-strategies Don't be a sheep - find your true self.  Part of his true self was being a Lutheran and one of his books was a systematic sampling of The Book: 3:16 Bible Texts Illuminated abstracts, discusses and illustrates the sixteenth verse of the 3rd chapter of every book in the bible. 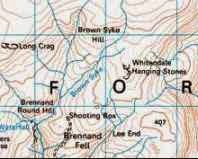 I like that; it reminds me of my 2813184 project which never got beyond the concept.  Our phone number in Newcastle upon Tyne was 091-2813184 and I thought it would nifty to phone all the other 2813184s in British telephone districts . . . and then?  ?Invite them to meet me at the geographic centre of Britain on Walpurgis Night?  Now really, was it kind inviting to folks to have a party in the middle of a peat hag in Lancashire when you could accept the assertion of the people of Haltwhistle in Northumberland that their town was the centre of of the world Britain, or anyone of a number of other claimants depending on how you define the parameters - the big island only, the whole archipelago, the bit that has Mrs Windsor as Head of State.  Haltwhistle, conveniently for the 2813184 party, has a railway station but isn't named for that fact, as some believe.  The name antedates railways by a long stretch of time: Hautwesel (1240), Hautwysel (1254), Hawtewysill (1279), Haltwesell (1610) and probably indicates a hill [haw] near the divided [twy] stream [wella].

Knuth is famous for offering $2.56 for anybody finding a typo in one of his books. Why 256? because that is a hexadecimal dollar (16x16 rather than 'normal' 10x10). He claims to have written more than 2,000 checks under this project and would be $20,000 in the hole if everyone had cashed them. In fact, almost all of them are kept safely in a drawer for the grandchildren unless they are framed and stuck up on the wall of a basement machine room.  It's a bit like my claim to be in an exclusive club of people who have found errors in PHYLIP, Joe Felsenstein's software for calculating phylogenetic trees. That took time, attention to detail and a refusal to accept that what was delivered was true, and I am, accordingly, still dining out on it.  Occupying pride of place in Knuth's home [R] is a grook by the Danish scientist's poet Piet Hein:

But the hook on which I'm hanging Don Knuth now, is that I was in the pottery zone last Sunday and there's a lovely story about tiles and Knuth, called Wrong Turn on the Dragon on the Numberphile channel of youtube.  I'd leave it at that if I didn't know that virtually nobody follows through on the copious links which I shovel into The Blob.  The deal is that Knuth built a new house and had a geeky fractal design in mind for filling a central wall. His design showed a particular sequence of 2^9 = 512 folds/turns which could, according to the algorithm be either mountain or valley folds / left or right turns.  The size of the design and the size of the wall required about 1000 tiles [many blank] 2x2in (5cm x 5cm) in size.  They took their design up the coast to Sausalito where their favorite ceramicist had his studio, and were gutted to hear that they only made tiles 3.5 inches across.  But, said the potter brightly, they were going to close the place down for a week in June for vacation and the Knuths were welcome to use their clay, glazes and equipment to make their own tiles to whatever daft size they wanted and these custom tiles could be fired when the kiln had its first run later in the month. And it was so. The twist in the dragon's tail was that, years after the house was built and the tiles put up to intrigue all Knuth's mathy pals, he realised that he'd made one incorrect turn and back-flipped half of the design outwards. They say that Persian carpet weavers put in one deliberate error when making their 900 kpsi (knots per sq. inch about 135 k/sq.cm) carpets; lest they offend god with their hubris.
Posted by BobTheScientist at 08:38