a lot of space

Do you worry about the possibility that there will be a fatal collision in outer space as an expensive new piece of kit, possibly carrying people on a mission of discovery and exploration, collides with one of the numerous bits and bobs left behind from previous missions of discovery and exploration?
NASA estimates that there are more than 18,000 lumps circling the Earth with a bigger than a saucer. Between 1957 when Sputnik, a 58cm diameter sphere with trailing antennae, was launched by the Russians on 4th October that year and 2000, 4,000 satellites had been launched into space and most of them hadn't come back down.  Back in the early 60s, there was so little to see up there that the newspapers would carry forecasts of when and where orbiting satellites could be seen.  They stopped that when the novelty wore off and the choice of objects got so great that you could see something pacing across the sky whenever you wanted.  So clearly there are more objects up there, including uncountable numbers smaller that a saucer down to chips of paint, than there have been objects launched.  Astronaut Michael Collins famously dropped his Hasselblad camera while doing a space-walk from Gemini 10 in 1966 and it's still there with the film cryogenically preserved. 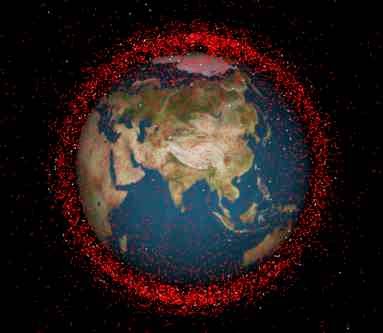 There are a lots of people out there offering to clear up the debris and they are prepared to put up some images to convince people to advance them money to do this. [L a smudged image from Astroscale showing debris as red pixels and functional satellites as white dots] Nobu Okada, the founder of Singapore based Astroscale plans to develop and launch sweeper satellites.  You don't really associate Singapore with the space-race any more than you do the Swiss, but Volker Gass of the Swiss Space Center at the École Polytechnique Fédérale de Lausanne reckons that its hoover CleanSpaceOne can be developed and launched for about $11million - a snip.  Nobody is going to cough up that sort of cash if the litter is less than the picture implies. The only reason the Singapore graphic looks so cluttered is that it is not to scale - each red dot is shown as a gross 55km wide.

For an antidote to this vision of space as cluttered I share [via tywkiwdbi] a model of the solar system at a moon=1 pixel scale. It is really empty up/out there. I like that obsessive attention to detail - it has great explanatory power not to mention an unexpectedly evocative poetry in pixel.
Posted by BobTheScientist at 07:02