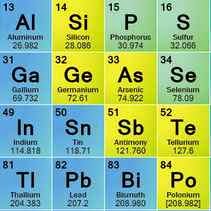 Years and years ago, a friend of mine who was a chemist turned fifty and I made him a ChemoNerd card hinging on the fact that tin is the 50th element in the periodic table.  I was basically trying to abstract a few QI facts about this metal and it wasn't too hard (which is entirely appropriate because tin is a paltry 1.5 of the Mohs scale of hardness - halfway between talc and gypsum which define Mohs 1 and Mohs 2). Ice and metallic lead have the same hardness: you can scratch either with your thumbnail. I've been waiting a long time to put tin on the map and as it is the 50th day of the 2015, I'll clag together a few titbits about the element.  You may find that Professor Poliakoff of the Periodic Table of Videos project is a bit dull on that element - but check out some of his other offerings, the whole table is there in 2 minute chunks.  For each of the elements that appear in the table fragment to the Left there are two numbers. The big one in the top left corner is the atomic number which dictates the element's chemistry: it is a count of the number of positively charged particles (protons) in the nucleus, which determines 1:1 the number of negatively charged electrons whizzing around the centre. Antimony [51] next door has distinctively different physical and chemical properties to tin because of the extra electron. On of the weird things that sets metallic tin apart from other metals is that it gives an audible creak "tin cry" when it is bent; it's something to do with the crystalline structure.

The other number given in the table above left is the atomic weight which is sum of all the protons and the neutrons in the nucleus.  Neutrons are about the same size protons but have no charge - they are a make-weight sort of glue that stablises the nucleus.  The atomic weight of tin 118.7 is a long way from a whole number because tin has the greatest number known of different stable 'isotopes': atoms of that element all, by definition, have 50 protons but there are 10 different neutron counts that are stable. There are also two dozen isotopes which are radioactively unstable but they don't stay tin for long! The heaviest isotope in the stable list [L] 124Sn is a little too heavy and so radioactive - but with a half-life of 100 trillion years; it's not fizzy enough to power a nuclear submarine.

Neither Tintin nor Rin Tin Tin are made of tin. Tin-foil in the kitchen is not made of tin, but aluminium; and tins as it tin-cans aren't either, although some of them are steel coated in tin to make more resistant to corrosion.  A lot of the tin-cans that go through out kitchen look like they are painted on the inside rather than tinned.  But maybe that's because almost all the tins in our kitchen hold tomatoes which are corrosively acidic and have been known to eat through the metal(s) when stored for a few months in one of our damp sheds.  We can use tin in this way because the metallic element and its inorganic compounds are not toxic.This is not true of organotin compounds which are used in a wide variety of biocidal situations: TBT tributyl-tin has been widely used as an anti-fouling paint on boats until it was finally banned in 2008 and TBT-oxide is impregnated into wood as a preservative.

For millennia tin was a highly tradable commodity because of its importance in making bronze an alloy of copper [90%] and either arsenic (initially) or tin (later) [10%]. Bronze was stronger, harder and more resistant to corrosion that either of its constituents. Enormous quantities of tin, as Cassiterite (SnO2) had washed out of the granite uplands in the South West English counties of Devon and Cornwall. It is believed that Phoenician sailors voyaged the whole length of the Mediterranean, past Gibraltar and up the wild Atlantic to trade for 'white' (metallic) tin.  The ancient metallurgists put a premium on tin because they were fully aware of the toxicity of  arsenic vapours generated by bronze-smelting. Indeed, the everything-makes-sense brigade makes a case that Ἥφαιστος Hephaestus the blacksmith to the Greek gods was, with his skin cancer and limping neurological deficits (Κυλλοποδίων) the embodiment of arsenic poisoning. The fact that tin has so many isotopes provides another channel of information to the archaeologists. In most deposits of tin the 120Sn isotope is most common but the precise cocktail of abundance of the other isotopes varies characteristically from location to location. Find a bronze arm-ring in Turkey and a chemist can tell you that the tin came from Cornwall. 4000 years ago, some brave and enterprising spirit put time and comfort on hold and journeyed to the end of the known world to bring back tin.  Not quite the same as driving the car to Tesco to buy some 'tin' foil.
Posted by BobTheScientist at 07:02