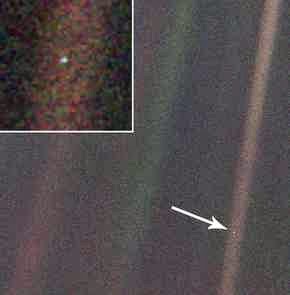 Today, 14th February, could be called Pale Blue Dot day because it is the 25th anniversary for the taking of an iconic picture of our extraordinary home. The Earth (the only one we have).  The picture [L white arrow picking us out from the background] was snapped from a distance of 6 billion km as Voyager I left the Solar System on its way to talk to anyone who would/could listen.  6x10^9km is 40 astronomical units AU which we use as a convenient scale for "moderate" distances out there. 1 AU is our mean distance from the Sun.  Back in 1990, Pluto was still by consensus considered the outermost planet, so passing beyond Pluto's orbit was definitely leaving the shoreline behind.  Actually Pluto's orbit is really eccentric varying between 30 and 50 AU and sometimes sweeping inside the more nearly circular orbit of Neptune. This helped demote Pluto to just another planetoid or "TNO".  At the beginning of the month, I pointed at a map of the Solar System with the moon 1 pixel wide to suggest how cold empty and inhospitable it is out there. The Voyager I picture is a larger scale, with the flash of reflected light from Earth having enough energy to turn one pixel pale blue.

It was taken as one frame in the "family portrait" [R] which captured Venus, Jupiter, Saturn, Uranus and Neptune as their own pixels.  Mercury was too close to the Sun to be distinguished and Mars was also awkwardly placed in front of the brightest thing in the area, so was bleached out of the picture. The signal was then beamed back home and took more than 5 hours, travelling at the speed of light, just to arrive. Voyager I was launched 5th September 1977, when I had long hair and a moustache and The Boy was still in diapers. In 1977, I was still two years from writing my first computer program on an IBM System/370 mainframe; there were no mobile phones; no interweb.  Clearly Voyager I didn't have an IBM mainframe aboard because the spacecraft itself shipped out at about the same weight, so the hardware was "primitive" by today's standards but amazingly sophisticated in what it was capable of doing constrained by the hardware limits of the day.  The engineers at the Jet Propulsion Laboratory really pulled a rabbit out of this tiny hat.  It took 5 hours to send a signal back to the Voyager I, so conversing with the craft was laborious.  You had to think what you were going to say.

When Voyager left in 1977, it took a message to the Other Chaps designed by a committee chaired by Carl "Billions" Sagan, who put together a Golden Disk of information that they thought would convey to the Others a) just how cool we were and b) where we could be located. When the Family Portrait was taken Sagan went all poetical on us: "From this distant vantage point, the Earth might not seem of any particular interest. But for us, it's different. Consider again that dot. That's here. That's home. That's us. On it everyone you love, everyone you know, everyone you ever heard of, every human being who ever was, lived out their lives. The aggregate of our joy and suffering, thousands of confident religions, ideologies, and economic doctrines, every hunter and forager, every hero and coward, every creator and destroyer of civilization, every king and peasant, every young couple in love, every mother and father, hopeful child, inventor and explorer, every teacher of morals, every corrupt politician, every "superstar," every "supreme leader," every saint and sinner in the history of our species lived there – on a mote of dust suspended in a sunbeam." Voyager I is now 130 AU from us, travelling at 17km/s, and Carl Sagan is long [20/Dec/1996] dead.

Tiny hats off to engineers!
Posted by BobTheScientist at 08:28