This is Christiaan Eijkman known best for his party trick of supporting a crayfish on his upper lip [R].  In Food and Fermentation Microbiology, my third year course at The Institute, he appears as the inventor of the Eijkman Test which is a reasonable diagnostic for the presence of fecal coliforms in, say, water samples. This is what you do: 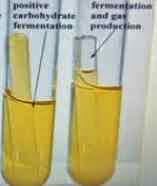 If the medium turns yellow and the Durham tube [R] fills up with gas and bobs to the surface, there is a racing certainty that you have coliforms, probably fecal. I'm not sure why we trib Eijkman for this rather than MaConkey but his name surely poses a spelinge test for our anglophone students.

Eijkman was born in Nijkerk on the shores of the Zuider Zee in the Netherlands.  He trained as a medical officer for the army and shipped out to the Dutch East Indies in 1883 at the age of 25.  He caught a dose of malaria and within two years shipped back home sick. It was good timing because he was able to go back to college and studied for a time under the giant of the microbiological world, Robert "Postulates" Koch in Berlin. While there, he met Professors Pekelharing and Winkler who had been tasked to work out the causes of beri-beri: a devastating disease of the tropical East Indies which was a huge drain on the Dutch colonial economy.  Eijkman joined their team and in short order found himself on a boat back to Batavia. When the Big Guns went back to Europe, Eijkman stayed on as the newly appointed director of the Medical Laboratory; having resigned from the army, he could devote his energies to scientific research.

I think he was a great scientist who looked to the evidence for his understanding and wasn't swayed by what Everybody Knew To Be True. He carried out some careful metabolic and physiological studies of Europeans and 'natives' and could find no significant difference. This put in the dustbin a lot of protocols for 'acclimatizing' white men to the tropics. Actually, it probably didn't - you may be sure that many people persisted in doing the same-old same-old in the face of scientific evidence that they were wasting their time. More importantly he cracked the puzzle of the cause of beriberi, a progressive and often fatal neurological disease which killed native soldiers and prisoners in disproportionate numbers even if they were young and fit.  Everyone had a theory, including 'vapours', rotten fish, and excessive perspiration.  The Pekelharing and Winkler Commission followed the "it must have been something I ate" theory and tentatively identified a bacterial coccus as probable cause before they went home. Eijkman more of less accepted this, evidence based, theory until he noticed that the hospitals chickens developed a condition that looked suspiciously like beri-beri after they were fed on rice which was used to feed the native soldiery. They recovered when some martinet in the army refused to allow military rations to feed civilian birds! That was Eijkman's cue and after further research (convenient lab 'rat' now available) he was able to show that brown rice had a beneficial active principal that was lost when the rice was 'polished' to remove the husk.

Eijkman fell sick again shortly after this key insight and it was left to others to identify Thiamine as that active principle and also to coin the phrase vital amine and then the word vitamin to describe dietary essentials that were not proteins, carbohydrates, fats or minerals. You shouldn't confuse thiamine and thymine, the former is vitamin B1, the latter one of the four bases in DNA, although they both have a pyrimidine CCCNCN ring as part of their molecular structure.  Eijkman shared the 1929 Nobel Prize with Sir Frederick Hopkins for their complementary work on identifying that minute quantities of vitamins are essential for normal healthy life.  A varied diet will supply most of these in sufficient quantities and it is only when food is limited in its variety that weird symptoms manifest.  Classically sailors lacked vitamin C because they lived on a monotonous cycle of salt meat, dried peas and beer without fresh vegetables.  Likewise too great a dependence on polished rice (or taro, cassava and other starchy vegetables) won't yield enough vitamin B1.

Eijkman was successful in his endeavours at least partly because he paid attention to what was happening around him and he wasn't prepared to accept what other people considered certain - because they were all too often wrong.  He is recognised by the Indonesian Government in the Eijkman Institute for Molecular Biology in downtown Jakarta. The Eijkman-Oxford Clinical Research Unit (EOCRU) was created in 2007 as a collaboration between the EIMB and Oxford University. There is also an Eijkman-Winkler Institute for Clinical Microbiology attached to  Universiteit Utrecht where he was working when he won the Nobel Prize.  He died the following year in November 1930. Laten we ons petje te verwijderen.

Posted by BobTheScientist at 06:28