The Lady of the Lead

My girls Dau.I and Dau.II never went to school and have now left home and are productive tax-paying members of society. We got a fair bit of lip, and also unspoken brow-furrowing about how they had burned their boats for college.  I find this quite tiresome, so it's always nice to hear about people who were home-educated and did well by the usual criteria of wealth and status rather than things that matter like kindness and good humour.  Alice Hamilton didn't go to school and finished up as the first woman to obtain a faculty position at Harvard. Like Gerty Cori, she also got herself a stamp [L].  She was raised, with an extensive brood of sisters and a brother on the estate of her grandfather, a self-made magnate from Scotland, outside of Fort Wayne, Indiana.  Her parents had peculiar ideas about what education was about: they had no time for 'nonsense' like arithmetic and American history, but really valued theology, literature and language, in about that order. As each girl turned seventeen, she was sent off to 'finish' at Miss Porter’s School in Farmington, CT, where according to Alice some of the teaching was "the world's worst"; but I guess they learned how to curtsey neatly and knew which knife to use with the peas.

Her mother had instilled a strong sense of social justice by conspicuously disapproving of such societal norms as lynching black men, child labour and police brutality.  So it was not completely out of character when Alice announced that she wanted to be a doctor to help poor people in the slums of the grossly unequal society that was the USA in the early 1890s. To this end, she cobbled together an education in biology, physics, chemistry and anatomy and enrolled in Medical School at U. Michigan. That was a good fit and she found that her bleeding-heart ideas of helping the poor took better focus in the idea of doing clinical and laboratory science to help the poor.  She did a year of postgraduate research with Simon "Shigella flexneri" Flexner, one of the giants of 19thC microbiology, at Johns Hopkins U in Baltimore. Then she went on a tour of Germany with her sister Edith: brushing up their languages, doing the galleries and . . . auditing university classes in pathology and microbiology.

On her return stateside she landed a job teaching pathology at Northwestern U in Chicago at the same time as finding a billet in 1897 at Hull House; an extraordinary experiment in living where middle class people lived cheek-by-jowl with the dirt-poor and attempted to bridge some of the gaps between their unequal lives. Such "settlement houses" were loosely modelled on Toynbee Hall in East London. A few years later she was invited by the Governor of Illinois to serve on a committee of physicians investigating industrial sickness in the lead, paint and munitions industries. Work-place sickness was a consequence of industrialists itemising 'labour' as an expendable and seemingly bottomless resource: there was always some fresh chap off the boat from Europe who would work under any conditions to get a foothold on the ladder of the American dream. Health&Safety was a) expensive and b) hadn't been invented yet. 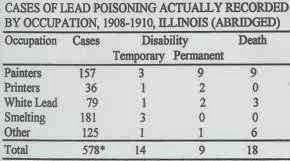 Alice Hamilton took to this with application and rigorous standards and she had a nose for finding breaches of the emerging standards for safety in the workplace, particularly about the effects of lead poisoning.  White lead 2PbCO3·Pb(OH)2 is a particularly opaque, white pigment widely used in paint that is also highly toxic [L data from the Report of the Commission for Occupational Diseases]. Unfortunately, lead paint tastes sweet, especially to children who have calcium deficiency. Like the Lady of the Lamp, Florence Nightingale, Hamilton was not adverse to gathering boxes of data in a process she called "shoe-leather epidemiology" and then analysing it to make clear where the problems were.  It was the compelling nature of these data that started. s l o w l y, the process of legislating at state and federal level for a better work-place for the workers on the shop-floor.  By recognising the characteristic symptoms after decades of observation, she turned up cases of lead-poisoning where nobody was awake enough to realise that lead was being used in some process in their factory.  She spoke out against leaded-petrol, for example, as early as 1925 but it was still for sale in Ireland 70 years later.

Sometimes it was evil and callous industrial robber-barons who were wearing out and discarding their work-force but often enough managers and owners were good men trying to turn an honest profit who failed to realise just how toxic their work-places were. I think Alice Hamilton must have had an extraordinary mix of empathy and assertiveness to face down and shame the men behaving badly whom she met every day in the course of her investigations. Exploring the Dangerous Trades was the title she chose for her autobiography. That's what it says on the paint tin, that's what Alice Hamilton spend her whole adult life doing. She was born on this day 27th February 1869, before DDT, PCB, TNT, CFC, BPA, added new levels of 'excitement' to industrial and environmental chemistry. She lived on and on through two world wars and unbelievable changes before finally pegging out in 1970 at the age of 101.  A lot of poor people, not only in America, owe their greatly extended lives to her.
Posted by BobTheScientist at 06:39