Now you sea it

About 20 months ago, I was writing about one of the bizarre extensions to Spanish territory, Peñón de Vélez de la Gomera, which was an island off the coast of Africa and so had a tenuous claim to being separate from the dismemberment of Spain's African Empire.  Then in the modst of a torrential storm, in 1934, the narrow strait between El Peñón and the mainland was filled in and it became a little more difficult for Spain to defend its territory - morally or physically. 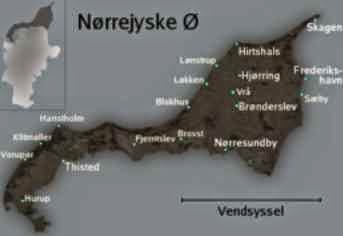 Poseidon lost a little territory that time, but today is the 190th anniversary of one of his gains. Denmark is a small and civilised country in Northern Europe joined to Germany but looking wistfully across the Skaggerak and Kattegat to Sweden and Norway. The three countries are divided by a common language that they affect to believe are different from each other. Earlier Blob-sniping at Danish. About 70% of Danish territory - we'll ignore the continent of Greenland [50x bigger than the mother-country] and (for now) the archipelago of The Faeroes - is made up of the Jylland/Jutland peninsula from which you can walk to Germany, and indeed Santiago, without getting wet feet. The other 30% is an interesting collection of at least 400 islands, 70 of which are inhabited by people - even if it is only a handful of people on some of the smaller/remoter specks of dryish land.  Only one person lives on each of Vorsø, Tærø, Dybsø and Saltholm. No prizes for guessing that the Danish for island is "ø". On the other hand nearly 2 million people (a third of all Danes) live on Zealand because it holds København, the national capital, in its palm.  Things are fairly unstable up there, rather like the situation in much of the Netherlands which loses a few towns and villages every century or so in a storm surge.The most recent such loss of Danish territory was Jordsand, one of the Wadden Sea Islands facing the full thump of the North Sea. It was 2,000 hectares [20 sq.km] in 1231, but by the end of that century was reduced to 40 ha; half of that was washed away in 1763; and the last fragment sank beneath the onslaught of a Hundred Year's Storm in December 1999.  A bit like the loss of Eilean-a-beithich in 1882 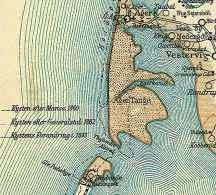 The second largest island is also Denmark's most recent.  Vendsyssel-Thy (4,700 sq.km) is the asymmetrical cap [R above : Vendsyssel, as indicated is the fat chunk to the East; Thy is the Western tail and they are joined by the Hanherrederne isthmus] that sits on the top of the country.  The last town at the very Northern tip is Skagen - giving its name to the more widely known Skaggerak strait.  At the opposite - Thy - end of the island is a village called Agger which you can see at the very top of the map [L]. Before 1825 the sandy spit to the South of the village was known as the Agger Tange (isthmus) because Agger (and by extension, the rest of Vendsyssel-Thy) was connected thereby to mainland Europe.  On the 3rd February that year a crashing storm burst through the dunes to create the Thyborøn Kanal which is the start of a long meandering waterway - only 300m wide in places - that now separates island from mainland. Expect more such stories as things hot up on planet Earth.

More recent Blobbery on Islands.
Posted by BobTheScientist at 06:55