Who gets the sales tax? 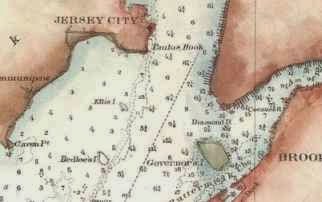 Woot!  No better way to start the year than with the resolution of a fight.  On New Year's Day 1892, the immigration station at Ellis Island opened for business.  The immigrants passed by the Statue of Liberty, with Emma Lazarus' sententious welcome:

“Give me your tired, your poor,
Your huddled masses yearning to breathe free,
The wretched refuse of your teeming shore.
Send these, the homeless, tempest-tossed, to me:
I lift my lamp beside the golden door.”
The statue had been dedicated a few years earlier on 28th Oct 1886. You can see from ye antient mappe above clipped from a post by the New Jersey Society of Professional Land Surveyors NJSPLS that Ellis Island and the larger Bedloe's Island [now Liberty Island] to its SSW are well to the West of the line that bisects New York Harbour and so should be part of New Jersey.  But in 1794, the State of New York leased the island from Mr Ellis and started to fortify it.  The island was formally ceded to NY by NJ in 1834 but the tidal mudflats with their rich oyster beds remained incorporated in the Jersey shore. 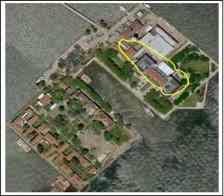 In the 1880s the huddled masses of the dispossessed started to flood in from the shtetls and ghettos, bogs and mountains of Europe looking for a new life in a New World, overwhelming the existing reception facilities. A great many of them wanted to start their American days in New York accordingly the federal government, which had acquired both Islands built a reception hall on Ellis Island and a clatter of quarantine wards off to the side.  From the very beginning, the island accreted more dry land to host the ever extending complex of buildings.  The aerial shot from the NJSPLS shows the original island in yellow outline containing the iconic original tiered reception hall. 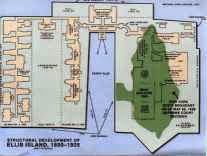 That more or less agrees with the site plan [L green bits = NY] of the squared off modern island which is now an Immigrant Memorial and tourist destination whose map I've clipped from another informative essay on the issue by Proud Geek.  Naturally New York claimed the whole island by citing the 1834 agreement.  Naturally New Joysey claimed the additional land-fill sections of the island as part of the original Oyster beds and tidal flats. It's really a storm in a tea-cup because the whole thing is maintained and administered by the Feds but that didn't stop people getting into a posture / counter-posture flap. Mayor Rudi Giuliani, for example, spluttered that his immigrant nonno had had no intention of coming to [ptui ptui] New Jersey. The dispute worked its way up to the US Supreme Court that ruled in favour of New Jersey on 27 May 1998. 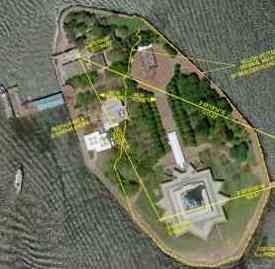 But the lads from New Jersey's NJSPLS are not stopping there as they've noted the parallel situation on Bedloe's / Liberty Island: the famous statue clearly stands on the original ceded-in-1834 Island but the t'ilets, restaurant and gift-shop are just as clearly built on the land-fill extension to the island that has accreted to the West.  Where do the franchisees of the gift-shop pay their sales tax? To New York! As 4 million people visit Liberty Island each year and many of them buy a coffee or a plastic statue, there's enough money in the sales tax to fund a few teachers elsewhere in the state.  As the base rate sales tax in NY = 4% while in NJ = 7%, the descendant tourists of the original immigrants have a vested interest in maintaining the status quo.
Posted by BobTheScientist at 09:06