Storm Rachel came roaring through here last night.  It started sounding buffetty around 2000 GMT and so I started tuning into Alan O'Reilly's CarlowWeather twitter-feed, which may drop 140 word sound bytes but also a rash of great data-rich pictures.  Ireland is hiding in the SE corner of this picture below the skirts of a classic anti-cyclone storm clipped from CarlowWeather.  Looks dynamic, no?  Even in a static picture! 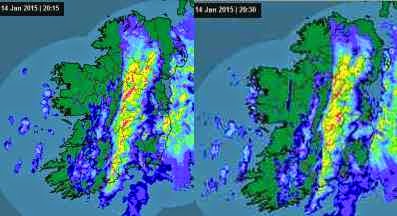 Here's two consecutive clips from met.ie's rainfall satellite showing the squall-line whisking across the country from the West heading for the Irish Sea and Britain. If you've ever hung laundry outside in Ireland, you really need to tune into this site which gives the rainfall over the previous 4 hours at 15 minute intervals. It says: stair-rods; cats&dogs; incommming in, say, ten minutes.  So you can be like Francis Drake and finish your cup of tea before departing outside to save the sheets from getting an extra fresh-water rinse.  The rain-radar has also helped choose when to do field work for science.

This is what things look like this morning.  It gives you a sense of how big an anti-cyclone is: Ireland is 500km from N-S.  15,000 homes are without power, including 1300 in Tullow Co Carlow where CarlowWeather monitors the meteorological situation and shares it with the world (Cheers Alan!). The storm is still whupping the NW of the country, so as one problem gets fixed a tree will fall across wires somewhere else in the forest.  RTE reports that several mobile-phone masts have ceased transmitting.

It's two years and four days since the Real Rachel (Rashers-the-dog) left us.
Posted by BobTheScientist at 07:08