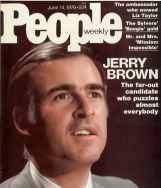 Not owning a TV, my access to news is limited and parochial.  I get 30 minutes of Newstalk-FM on the drive into work in the morning and I get to hear whatever is floating the boat of Ivan Yates and Chris Donohue.  Often good copy for The Blob. A few days ago I was reading part of the backlog of Natures of which I have a substantial unopened pile and found an article about Jerry Brown, Governor of California. I was brought up all standing because I remembered a Jerry Brown, Governor of California, [R, 1976] way back in the 1970s and I knew my Nature-backlog didn't go back beyond 2014.  It turns out that, having been Governor [D] of the Golden State from 1975-1983 (preceded by Ronald Reagan) and having a shot at the Presidency vs Jimmy Carter/Gerald Ford in 1976 and Ronald Reagan/Jimmy Carter 1980 and against George W. Bush/Bill Clinton in 1992, he has been back as Governor since 2011.  He was born in 1938, so is no longer young but attracts a rather fanatical loyalty among his supporters.

The article in question was about Governor Brown getting agitated about climate change and eliciting some science from a couple (and Couple) of palaeoecologists Anthony Barnosky and Elizabeth Hadly who worked at UC Berkeley and had recently published a paper in Nature about climatic tipping points. Brown the consumate politician wanted Barnosky and Hadly to re-write their findings in words that politicians and voters could understand.  It was an transformative experience for the boffins because re-languaging forced them to re-consider some of their certainties.  It also showed them that they owed tax-payers an explanation for how the public's supportive $$$ were being spent.  And, surprise!, their Outreach statement had far more impact than their original scientific paper.

But in among the feel-good I found this WTF? statement: "One day they got a call asking for hard copies of the consensus statement that the governor could take to southern California for a meeting with President Obama and President Xi Jinping. They went to a printing shop, ran off two dozen copies, then Barnosky and his daughter drove the reports to Sacramento, a six-hour round trip."  Only in America could it seem normal that a six-hour car-journey was an appropriate way to get a PDF from A to B. I'm missing some info because Berkeley-Sacramento is only 125km. The Americans invented the interweb but they're wedded to their wheels. Neither is the irony of a gas-guzzler delivering dire forecasts about global warming lost on me.  That Governor Brown has some charisma.
Posted by BobTheScientist at 06:51