Plagiarism - not so easy

I've had occasion to talk about plagiarism before: treating it as a ritualistic box-ticking exercise; being destructively uncompassionate about it; exposing the folly of being dogmatic about it. I've also written about plagiarism - owning somebody else's ideas - where there is no written record. As I've said, plagiarism is a Bad Thing but it turns out to be quite hard to spot it when there is a bit of nuance in the case. We circulate a PDF called Credit Where Credit is Due which outlines policy on matters of plagiarism and gives help about how material that you cite or quote should be referenced. One of my colleagues had the bright idea to devote a session to the problem in the universal 1st Year Course called Quantitative Methods.  This course concentrates on allowing the students to get some practice at problem solving and is not a series of lectures; rather it complements a series of lectures on mathematics, statistics and computers that we deem to be essential prerequisites for science.

I was skeptical about the value of the exercises because they described a set of abstract anecdotes  which had to be binned as "plagiarism" or "not plagiarism". I thought the artificiality would make it too easy to spot the sin and it wouldn't really help much in the real world where the specifics would be different and so more difficult. But it turned out to be interesting because there was disagreement among the students and, I must add, disagreement between me and the official line.  Although I'm the first to admit that my moral compass is a little wonk. The following two scenarios caused the most difficulty/dissension for us; you might ask yourself which if either of them is okay.  [I hasten also to add that these are <citation/referencing alert> courtesy of the Library of the University of Leeds]
These are both "plagiarism" but I'm not convinced and we more or less agreed that it would be okay if you put an appropriate flag after the first example citing your earlier original work. I find the second one to be disagreeably pedantic and uncharitable. It is so little different from a punctuation error that I had a sinking feeling about what level of correction I really should be doing.  Cripes, if I red-penned every spelinge errur, every misplaced apostrophe, every dangling modifier, every verbless sentence as well as every missing quote mark . . . well I wouldn't have time to write The Blob and then the sky really would fall.  In the discussion, it transpired that some course manuals require students to label diagrams "in block capitals" and are liable to lose marks if they fail to do so. Well really!? How is a rule like that going to inculcate a love of science, foster the spirit of enquiry, help students think independently? So I was wrong about the utility of the exercise, it generated some engagement and some creative ideas and clearly some original thinking.

The second exercise was similar in that it began to address the fact that plagiarism is not black and white and you can have both venial and mortal plagiarism. I cut up a sheet of paper with eleven situations (similar to those described above) into 11 separate pieces of paper.  The students were asked to read each paragraph and then sort them in order of most plagiar-sinful [1] to squeaky clean [11], I got them to do this in pairs.  Soon there was a buzz of chat as each couple discussed the merits of this case over that and I soon had eight lists to compare. When they twigged that I was gathering the data, one women jested that it was too difficult to think this out with her partner and she would just copy the same list as the people on the the other side of the bench . . . and suitably reference the fact.  I thought that was a pretty sharp deconstruction of the whole protocol. We also had an interesting discussion about how long the stolen sentence/phrase had to be to preclude independent origin as an explanation of the similarity: this is a central issue in aligning biological sequences in the world of bioinformatics.

But I was very impressed by and unaccountably proud (no credit to me of course) of another couple who thought they could best crack the problem by reassembling the page which I had cut up by lining up the slight differences - like an indenture - in the line my scissors had made.  That was so left-field clever that I predict a great future for them in science.

ANNYway, here's the data <huzzah! for data>.  No two lists were exactly the same (so if anyone had plagiarised the plagiarism exercise, they had put in sufficient spoilers to make it undetectable). What I show here is a correlation matrix.  Each cell contains a correlation coefficient CoCo between the order-of-sin calculated by two different couples. A CoCo runs from zero [no similarity at all between the orders] to 1 [exactly the same order and <plagiarism alert!!>] 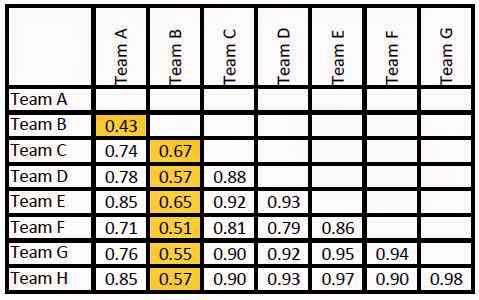 What this tells me is that Teams E, G and H have very nearly the same assessment of what constitutes plagiarism; while Team B has a radically different assessment from everyone else. Now it might be that Team B knows something that the others are missing but I'll stake €5 that E,G,H are correct in a Wisdom of the Crowds way and that the Bs are a bit lost . . . or wholly dishonest perps who shouldn't be trusted with the petty cash.
Posted by BobTheScientist at 06:46