Ready for more island?  January of the Islands: * -I * I * II * III. But stop reading!  Before you go any further you have to open a youtube mix of Okoumé and Jonanthan Painchaud in a separate window for Francophone background music. For why?  Because Johnny Hot-Bread comes from the Îles-de-la-Madeleine / Magdalen Islands of which we treat. They are an archipelago astride the outer Gulf of St Lawrence amounting to 200 sq.km strung out in a line much nearer to Prince Edward Island than to Province Québec to which the islands are administratively joined.  The 200 sq.km includes not only the sandstone rock but also the dunes, foreshore and outlying sandbars.  So there is rather less land available for, say, building houses or supermarkets. 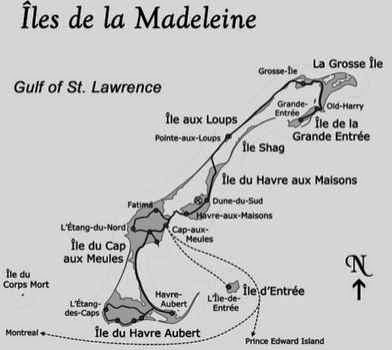 If you think the islands look so thin and wispy that they would blow away in a stiff breeze, you'd be putting your finger close to the truth.  They are 65km / 1000 arpents (*) from end to end, the thicker bits are made of sandstone faced by white sand beaches and dunes.  The thinner bits are just sand, with or without marram grass Ammophila breviligulata and sea rocket Cakile edentula and C. maritima.  Cakile, as the name  edentula implies. is edible - a tasty member of the mustard/brassica (incl. an mmm-good alphabet of edible: broccoli, cabbage, horseradish, mustard, radish, turnip, wasabi, watercress) family. These plants are vital first colonisers of blown sand, having a high salt tolerance they help stablise the particles and so catch more blown sand until >!shazzamm!< you have a dune that can be as high as 8m above the high-water mark.  Dunes currently extend more than 3x the length of the archipelago, mainly in two bands along the NW and SE shores.  Les Îles-de-la-Madeleine are more worried about global warming than some of the rest of us. 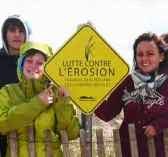 The Islands used to be regularly isolated by pack-ice during the Winter which was sometimes tough on the inhabitants but served to protect the fragile coast from the worst ravages of the Winter storms. Pack ice occurs less and less frequently nowadays (down 30% since 1960) and it is predicted that by 2050 the shoreline dunes will have receded as much as 80m from the present high-water mark and even the sandstone cliffs will be scalped back nearly 40m. Being porous, sandstone is particularly labile under freeze-thaw cycles which crack off lumps of rock into the sea. With great resolution, les Madelinots et Madeliniennes get a big meitheal (*) together and make fences of woven cedar to act as wind-breaks and sand-catchers.  Then they take hundreds of marram seedlings and plant them like paddy rice with rhythm but without the schistosomiasis or the conical hats.  Their ancestors long ago removed the ecological succession climax species of Eastern hemlock (Tsuga canadensis) and Eastern white pine (Pinus strobus)  but some effort is being made to integrate agriforestry (mainly willow Salix spp) as wind-breaks and for soil conservation.

The archipelago is mostly sand garlanding sandstone that was laid down maybe 300 million years ago, but there are also volcanic basalt intrusions and most interestingly and lucratively a humungous salt dome probably 5km thick.  This is being abstracted at the rate of a million+ tons a year and the salt mines provide employment to about 200 of the local people.  If you live anywhere near the NE coast of North America you will have driven along Magdalen salt-gritted roads in the Winter.  Did I hear salt-dome and abstraction in the same paragraph.  Let's hope that  Îles-de-la-Madeleine doesn't disappear down the orifice like Bayou Corne in Louisiana.

Another thing that deserves attention is that here, perhaps alone in the whole world, English is losing ground.  The archipelago used to have both Anglophone (primarily in  Grosse-Île and Île d'Entrée) and francophone Acadian (everywhere else) communities but the English speakers have been emigrating and/or assimilating into the local majority and are now down to about 6% of the population of the archipelago.  They even have a help-preserve-our-heritage ginger group Council for Anglophone Magdalen Islanders CAMI.

(*) arpent an old French measure amounting to 180 olde Ffrenche Feet or about 58m which was driven out of metropolitan France itself by the metric system but is still hanging on in Québec and Louisiana. Arpent is also a measure for area, a bit smaller than an acre or about 0.4 hectares.  In a similar way the same word (or clatter of words) rod-pole-or-perch was both as a measure of length [4 rods = 1 chain, 10 chains = 1 furlong, 8 furlongs = 1 mile] and of area [4 rods/rood = 1 acre]. Long may they all survive - diversity rocks!
(*) meitheal is Irish for a work-party for saving hay, raising  a barn or moving large rocks: what neighbours did for/with each other before television


Posted by BobTheScientist at 06:37