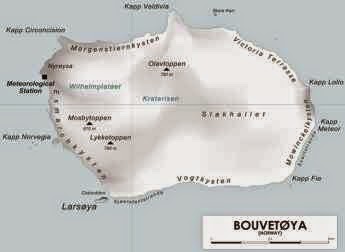 New Year's Day 1739, Bouvetøya was discovered by Jean-Baptiste Charles Bouvet de Lozier, a French adventurer and explorer.  It promptly disappeared again for 70 years before being rediscovered in a different place to that reported by Capitaine Bouvet.  Then in 1808 it was noted by a British whaler Captain Lindsay and called Lindsay Island.  An American sealer Benjamin Morrell claimed to have actually landed on the island and slaughtered some seals there in 1822, but Morrell has left a legacy of improbable claims that has called into question all his observations. It is rather more likely that Captain George Norris landed on the island in 1825 and claimed the speck of glacier for Britain.  Then again he also saw another island 70km NNE which he called Thompson Island. That island was definitely a fantasy. Notwithstanding that, Thompson Island appeared on maps and atlases until at least 1943.  It's a good thing that we have covered the whole globe with satellite photography but not very romantic as nobody is now going to discover their own tropical paradise.  There is a Bouvet Island mystery, however, which involves an abandonned boat and has some similarity to that of Flannan Isle.

Bouvet Island is not very useful: it is a quiescent volcano 90% covered by glaciers, it is shrouded in cloud down to sea level for 300 days most years, there was no accessible landing place, and no obviously useful resources.  So when the Norwegians landed there in 1927, possibly for the first time, hauled up the Norsk flagg [R] and claimed it for Haakon VII and the Norwegian people, only the UK spluttered some protests.  But Norris's 1825 fantasy island weakened the claims of British priority and Bouvet Island is now a Norwegian dependency and wild-life sanctuary.  Every few years Norway sends an expedition down there for a little arduous Antarctic surveying, building a weather station or leaving a cache of supplies for ship-wrecked mariners. When they return a couple of years later, often enough no trace of their previous endeavours remains: the huts and flagpoles have been razored off the face of the island by some horrendously fierce Winter storm.  The paucity of human landings means that, almost alone of remote islands, Bouvet is free of rats (Rattus rattus and R. norvegicus), mice (Mus musculus), and cats (Felis catus) to wreak havoc on the birdlife.  The only mammals found ashore are elephant seals (Mirounga leonina) and the Antarctic fur seal (Arctocephalus gazella).

Bouvet has the distinction of being the remotest speck of dryish land on the planet. It is the last blip of the Mid-Atlantic Ridge which blurfs up more-or-less equidistant between the Old World and the New. The nearest landfall is the almost equally tiny and remote Gough Island 1600km further North followed by the lights and amusements of Queen Maud Land 1700km South on the Antarctic mainland.  Gough Is. is the next wart up on the Ridge followed by Tristan da Cunha, St. Helena, Ascension Is, Pico in the Azores, Iceland and Jan Meyen. They are all the result of tectonic upwelling as new material is being cycled up from the magma below.  Iceland is growing wider at a rate of ~5cm per year (remember Eyjafjallajökull in 2010 and Grímsvötn in 2011?) which sounds little but amounts to 2 soccer pitches every year. There is an outside chance that Thompson Island really was there as a volcanic eruption but got washed away in a storm.

Bouvet is not that far South (54°25'S): on the opposite latitude to such mild and salubrious places as Edmonton, Belfast, Kiel, Kaliningrad and Moscow.  Even Kiska Island in the Aleutians, which is the nearest land antipodeal to Bouvet, looks green and forgiving compared to the basalt ice-slab that is Bouvet.  Correct that: Kiska Island looked green and inviting before WWII when Kiska was first occupied by a Japanese garrison and then reoccupied by US and Canadian troops in August 1943.  So now the island is littered with the detritus of war.

Golly, it's an island start to the year.  I would have written up Ile de Bouvet yesterday except that I got carried away by the opening of Ellis Island in New York Harbor, also on 1st January.
Posted by BobTheScientist at 04:54