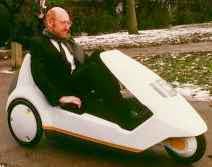 Sir Clive Sinclair in a Sinclair C5 [L] is a memorial tribute to an extraordinarily creative man.  Why today?  Because it's the 30th anniversary of the launch of his pioneering C5 electric vehicle in a razz-ma-tazz event at Alexandra Palace in London.  There was something for everyone in the audience: mugs, caps, magazines, key-rings, t-shirts and a C5 bag to carry your loot away. When six symmetrical young women popped out of cardboard boxes and motored silently round the arena it was every motoring correspondent's dream.  It didn't stop them from lashing into the concept, the design, the battery-life, road safety, the exposure to weather, the exposure to exhaust fumes . . . in fact the whole thing was quickly flushed down the toilet of history and Sinclair lost a fortune. We were big Sinclair fans because The Beloved had been given a chance by him in his early '80s days as a pioneer in personal computers, and I came within a whisker of buying a C5 myself.  But I was stopped in my groupie gallop by the relentless negative publicity by the Press, the AA and the Consumer's Association that couldn't counteract a £3 million promotional spend by the Sinclair company.

It is a good story: a parable of what an inventor and entrepreneur has to do to get his back of the envelope vision from blueprint to multinational actuality. The company Sinclair Vehicles had Lotus design a feather-light, horse-strong chassis. The 12V battery was engineered by Oldham for multiple-rechargability but was still lead-acid and so intrinsically heavy. The 250W motor was was produced in Italy by a subsidiary of Philips modified from a truck cooling-unit. The aerodynamic polypropylene (form ICI) body was the largest injection moulded object ever produced at the time. All these at-the-edge components were sourced and negotiated and haggled and integrated into the final design. They secured grants from the Welsh Development Authority to assemble the parts in a Hoover factory in one of the post-industrially depressed Welsh valleys.  Oldham Batteries, which had employed 1,000 people in a suburb of Manchester, shut up shop in 2002, the factory was demolished and is to be replaced by a retail park - that's a metaphor for the British economy over the last 30 years.

It is also interesting how the blueprint got modified and constrained by the externals of the real world, so that it finished up neither fish nor fowl nor good red herring.  First off, although it was an insurmountable invisible certainty at the time, is the battery that weighed a hefty 15kg adding 50% extra to the kerb-weight. A lot of fun wind-tunnel engineering went into getting the shape aerodynamic but the machine could only make 24km/h on the flat. Indeed that was the statutory maximum because of 1980s UK policy changes to encourage electric bicycles in Britain - which would be free of vehicle tax and insurance obligations and safety-helmet requirements providing that the product weighed less than 60kg and could go no faster than 15mph. I don't think it could go much faster even when retrofitted with a madly noisy jet-engine.  Sinclair rather cheekily read the letter of the legislation, which was designed to differentiate bicycles from scooters and mobilettes, and came up with his electric tricycle. He was careful not to call it a car and compromised on "vehicle". If you've got 8 minutes to spare you can watch Chris Barrie panning the C5 while sort of acknowledging the creativity of its engineering.

It could have been different but only in a different world
I'll tell you (not a lot of people know this) that Clive Sinclair is a big fan of the poetry of W.B.Yeats. I mention that as a totally irrelevant positive as a small-small antidote to the carping about such irrelevancies as his baldness, his red-hair, his avoidance of e-mail, his taste in women, his Mensa IQ, and his lack of a university degree.  If a tenth of his detractors had done a tenth of what he achieved through his failures, the world would be a more efficient, cooler place to inhabit. The person who comes closest to mind compared to Sinclair is the amazing James Dyson.
Posted by BobTheScientist at 08:26