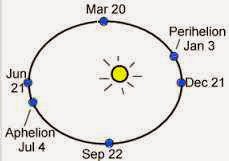 You know I'm a bit shaky on physics, but I think we should all acknowledge that today 04 Jan 2015 at 0630hrs GMT/UT our blue planet was at its closest point to the sun on the current orbit.  Perihelion happens about two weeks after the Solstice but varies between the 2nd and 5th of January in a way that is predictable to physicists but hops about in a chaotic way for the rest of us.  The last time perihelion was within the 24 hours of "Jan 3" as in the celestial picture [L] was in 2011.  Next year it will be 2250 GMT 02 Jan 2016.  These "random" fluctuations in the date and time are due to the fact that the Earth is swinging around the Moon rather like a fat uncle taking his 3 year old niece out on the dance floor at a family wedding. Call her Cynthia and, small as she is, her impact on the eccentricity of each spin round the room can make the Uncle pass the bandstand first on some orbits and after her (like a gentleman) on others.

Does it make a difference? It makes a sliver of difference because the sun is closer and appears bigger to the extent diagrammed [L]. Today we are 147 million km from the Sun.  On 6th July, this year's aphelion, we'll be 152 million km or 3% further away.  Astronomers will render these distances in astronomical units AU which is the average distance between the Earth and the Sun - a tad under 150Mm.  For those of us [that's 90% of all the people on the planet!] in the Northern hemisphere, particularly in temperate zones like Ukraine and Ireland we know that doesn't make the day outside any less Wintery.  Because that is due almost exclusively to the 23.5 degree tilt of the Earth off the plane of orbit.  In Icelandic Wintertime the North Pole is pointing away from the Sun, so the primary source of warmth is a) only scraping over the horizon and b) visible in the sky for a shorter time each 24hrs.

For reasons that are increasingly clear to physicists [and more or less amounting to magical flim-flam to the likes of me], the "line of apsides" connecting aphelion and perihelion is rotating slowly with respect to the fixed stars, taking about 112,000 years to come back to where it is today.  The axial tilt of the Earth is also wobbling eccentrically with a cycle of 26,000 years. The North Pole is currently pointing rather accurately at Polaris but it won't be in 13,000 years time.  The combination of these cycles seems to be relevant to long-term climate change as suggested 100 years ago by Milutin Milanković, about whom I'll have to find out more.
Posted by BobTheScientist at 09:04