If you have to undergo brain surgery you'd probably be better off under the hands of neurosurgeon Henry Marsh than in the charge of a second year houseman. It's all about the experience that comes from doing things again and again (and making some mistakes along the way). When Mr Marsh is pushing into the slobber that makes up your central processing unit, the chances are that you will be under only a local anaesthetic.  This is made possible because the brain has no pain receptors, but using a local is not just to make the anaesthetist's job less complicated. Such a protocol also enables the surgeon to get feedback and direction from the patient and so lessens the chance of a catastrophic cut with his hardware.  This addition to the care and cure of patients is largely due to Canadian neurosurgeon Wilder Penfield, who carried out some of the pioneering work in the field of mapping the brain. Although his mentor Otfrid Foerster also needs credit. It wasn't solely in the spirit of investigation, it also told Penfield whether he was getting closer to the seat of the lesion he was attempting to cure.  This was all a long time before CAT scans and MRI.  It is probable that his wandering off target to see the wider picture would not pass modern standards of informed consent. 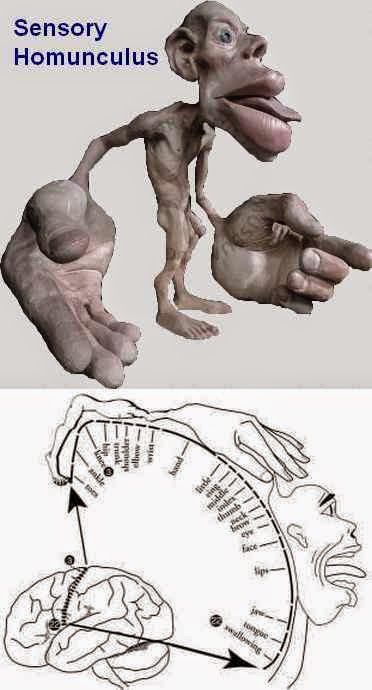 While Penfield had the lid off, he systematically stimulated the sides along a fold in the brain called the central sulcus [Top L across Penfield's head] and got the patient to call out where s/he felt the tingle (sensory) or which part twitched (motor).  After many operations, where the responses among patients was accurately reproducible, he was able to produce a detailed map of the brain's view of the body.  It was not quite as you might have expected. For example, your body is represented upside down with the head down by the ears and the toes poked down between the left and right hemispheres. The picture is symmetrical with the left hemisphere dealing with the right side of the body and the region devoted to the dominant hand is usually larger. The other finding that is less surprising with 20/20 hindsight is that certain small parts of the body loom disconcertingly huge on the homunculus that represents us in the brain.  The lips, tongue and hands are much more important in terms of the number of neurons that support them than the shins or feet.
Anatomists sort of knew this before Penfield because you can do a neat experiment to work out the density of sensory receptors on various parts of the body.  Get your guinea-pig to close her eyes and poke her with either one pin or two pins a known distance apart; ask her how many pricks she feels.  Two pins can be centimeters apart on the shoulders and still be detected as one event while two pins 1mm apart on the lips or finger-tips can be readily distinguished.
Knowing this map clearly has implications for understanding the phenomena associated with phantom limbs.  And while it is true that the penis is over-represented compared to the lower limbs it is dwarfed by the sensory importance of the hands. So, ladies, it is just not fair to say that men think with their penises: like you, blokes rely on their fingers. Wilder Penfield was born 26th Jan 1891 >!today!< in Spokane, WA and died in 1966 in Montreal, he was a pioneer of the then unknown landscape beneath the skull.  Hats off . . . so he can make the first incision?!
Posted by BobTheScientist at 07:20