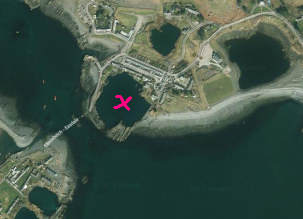 Yesterday we were worrying about Lake Baikal. Today, we're off the West coast of Scotland, on the sat-pic above NE is the (barely) island of Seil and SW is the island of Easdale. Here for context: http://goo.gl/maps/FIo6M. The oblique fat straight line on Seil is the main street of the picturesque village of Ellenabeich. Seil is separated from the mainland by a narrow fissure about 4km long but only 20m wide, so is not what you usually associate with an Atlantic Island.  Easdale, Seil and a handful of other bits of dry(ish) land in the area are known as the Slate Islands.  For more than 400 years they have been known for a very high quality outcrop of Dalradian slate and since before the time of James I/VI, this resource has been exploited to 'roof the world'.  You can see the results in the sat-pic above as a number of water filled holes in the ground.

The one marked with a fetching pink cross is particularly interesting.  Before the local industry started it was known as Eilean-a-beithich, the Isle of Birches.  The lake/island is 100m across or just about 1 hectare in size.  As demand stepped up in the 19th century, the little quarry on the island followed the seams of slate down and down until the working face was 70m below sea level.  Naturally, the company wanted to abstract as much slate from the vertical faces as possible, so the island was effectively disembowelled piecemeal.  Not everything came out as whole slates and the waste was dumped over the the edge of the quarry into the sea until it entirely filled up the gut between EaB and Seil; and the village of Ellenabeich could be built on the old cliff top protected by this slate-shard beach.

During the night of 21-22 November 1882 following a severe SW gale and a high tide, the now paper-thin edge gave way and the whole quarry flooded.  Anyone who left his treasured splitting wedge at his work bench the night before had a red face when he went to work the next morning.  Of course, it was worse than losing your tools, because everyone (240 families depended on the quarry for work) was out of a job with immediate effect.  Although nobody lost their lives, it was at least as devastating to the community as Hurricane Sandy was on New York City last year, and from a very similar cause.

So that's the history, geology and geography.  Where's the science?  We can surely do some guesstimating?!  How many slates were drawn from EaB during its working life?

You don't have my advantage of having a clatter of ruined sheds in the yard, so you'll have to guess where I can measure.  I've just lifted a blue Bangor slate (named for the N Wales region which also has/had very high quality slates) from the remains of a shed that was re-roofed in 1911.  It is 36cm x 24cm x 5mm in size.  That makes about 200 slates per cu.m.  I'll ignore the parts of the quarry that started from above sea level because I don't know how high the island was when St Columba passed by on his way to Iona.  Let's trade that against the wastage.  Below the tide line we have rock 100m x 100m and 70m deep to divvy up into slates at 200 per cu.m.  That's 140,000,000 slates.  Is that credible?

Wikipedia claims that towards the end of its life (when the quarry was presumably going full-pelt), EaB was producing 7-9 million slates for market each year.  So 140m is 20 years production: sounds reasonable.  I'd guess the working life was longer and the early productivity started lower.  Let's look at that sideways.  240 employees?  let's call that 100 "effectives" actually dressing slate, the other 140 being a) galoots being send to fetch a glass-hammer or to go back home and get The Da's dinner b) blasters, laborers and foremen leaning on shovels.  8 million slates / 100 slate-dressers / 300 days / 10 hours = 30 slates an hour in a hod ready to be carried out of the quarry like a colder version of Sebastião Salgado's Brazilian gold-miners.  Stimmt das?  Stimmt!  As we say in German.

Is that useful?  Our modest 100 sq.m. 2-storey home has about 1400 slates on the roof.  So Eilean-a-beithich could have roofed mid-19th century Manchester or Birmingham but not London, let alone the world.

Posted by BobTheScientist at 21:32